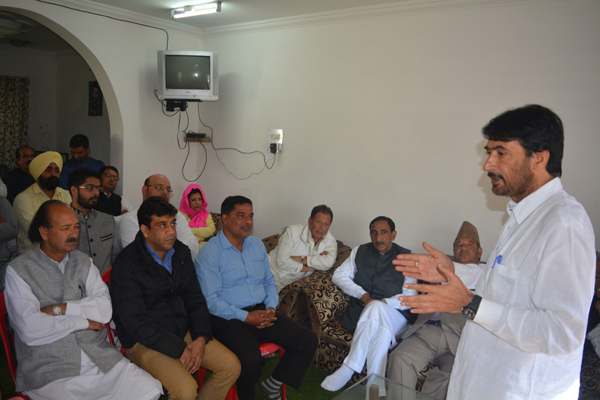 The Jammu Kashmir Pradesh Congress Committee (JKPCC) President G.A. Mir today called a meeting of senior leaders to discuss what they termed as “deteriorating situation in Kashmir valley and elsewhere in the state.”

Discussing, threadbare, in the State, Congress today expressed serious concern over the losses caused to property and life in the backdrop of the protests  and urged upon all the stake holders to help restore complete peace in the valley and elsewhere. Congress also urged the Government of India to “start a sustainable & meaningful political dialogue with all Stakeholders to find a lasting solution to the Kashmir problem, as the people of the State can no longer remain in a state of disarray for no fault of theirs’”.

Addressing the meeting of Senior Leaders of the Party, JKPCC Chief G. A. Mir stated that Congress party being a constructive opposition and as committed to the cause of serving people has remained steadfast in order to bring back normalcy in this strife torn valley and it will continue to work for restoration of complete peace, as the peace and normalcy is must for overall development of the State and people. He said any issue can be addressed through peaceful means alone.

He said, “the Valley has suffered immensely due to the extremely volatile situation in the backdrop of unabated killings and injuries to thousands and this is the right time for everyone concerned about the well-being of the people, should think about the repercussions this unrest is going to have economically and socially in the valley and elsewhere in the State in near future, the impact of which would be distressing enough”. He emphasized that Centre must come-up with some long term and short term CBMs to restore confidence of the people rather than remaining limited to official Statements only.

Mir said, “despite the strenuous efforts put in place by Congress Party both at State and Centre level, Government of India could not do what was immediately required or expected of it to put an end to the unrest, although many steps were taken to bring back normalcy, but no breakthrough was achieved in this regard, as the uncertainty in Kashmir continues”.