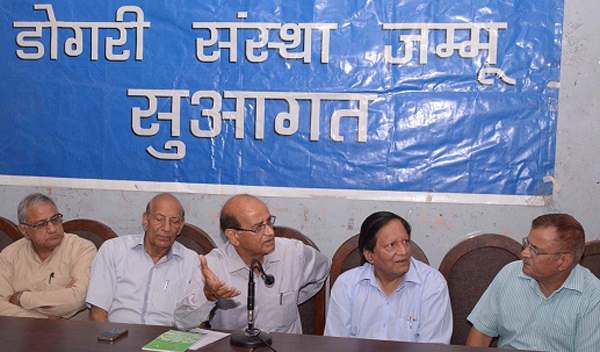 Dogri Sanstha Jammu (Regd) ,the premier literary and cultural  organization of the state has condemned the” blatant discrimination” meted out to the language of Jammu in the newly constituted central committees of Jammu and Kashmir Academy of Art, Culture and Languages.

Addressing a  press conference here today ,prominent writer and President of Dogri Sanstha Chhatrapal said, “what could be more shocking and inimical than the blatant discrimination and injustice meted out to Dogri ,  which is second largest speaking language  of the State and mother tongue of Jammu people , having constitutional recognition by the state and centre, finds no place in the newly constituted Central Committee of JKAACL, the apex decision making body entrusted with the responsibility to promote languages and literature among other things”.

“The decision of Kashmir centric bureaucracy to have no member from Dogri language in the apex body of JKAACL is another obtrusive example of the quantum of injustice and high-handedness unleashed by the top brass of the state administration against Dogri language and Dogri literature”, he said

He alleged that non of the members of newly constituted  central committee is Dogri speaking or represent Dogri language. “Therefore this committee can not do justice to the aspirations of Dogri speaking people of Jammu Region”, he said .

Describing it unfortunate and detrimental to the development of the language of Dogras, Dr Lalit Magotra, eminent littérateur and Convener, Dogri Advisory Board , Sahitya Akademi New Delhi  for Dogri said that Ideally, the central committee should be constituted to give representation  to all regions, communities and all aspects of language, art and culture, which the newly constituted committee fails to do. He said, It appears that the government  have unwittingly fallen prey to certain forces which conspire to create a wedge between the people of Jammu Region and Kashmir valley and between the people speaking Dogri and Kashmiri languages.

Terming this as an extremely  explosive situation Dr Magotra said , if corrective measures are not taken immediately, the situation may escalate completely out of Control .We the Dogri writers wish to state in unequivocal terms that  we  will fight to the end to stop this injustice perpetrated against Dogri language and Dogras .