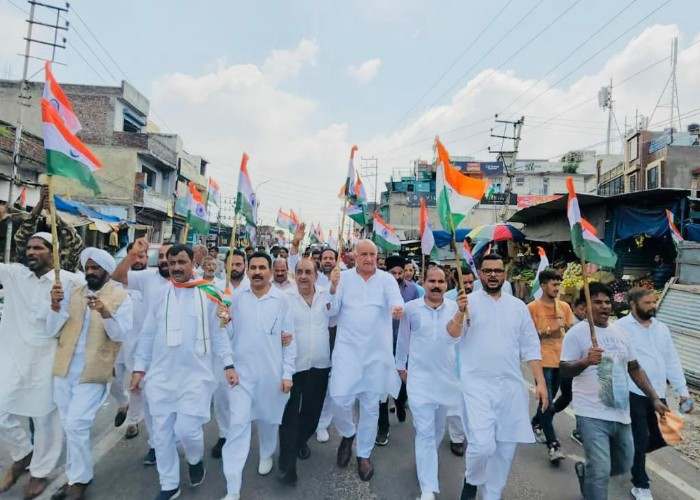 Every section wants to get rid of BJP Govt as soon as possible: Balwan Singh

Speaking on the occasion, Balwan Singh criticizing the policies of the BJP-led government said “we regret snatching the statehood of Jammu and Kashmir and transforming it into a Union Territory. BJP Govt every now and then talks about Naya Kashmir, normalcy and development but we don’t see the development on the ground, while frequent militant attacks expose their claims of normalcy. Citing the growing unemployment in the country, the Congress leader said J&K is one of the regions which tops the list with 22 percent unemployment as a result of which you can see the protesting youth on the roads every now and then.

Singh exhorted the cadre to further strengthen its rank and file to meet the challenges faced to Jammu and Kashmir unitedly and by upholding the cherished philosophy of communal and regional amity. He also urged the cadre to reach out to the people in a big way so that all the problems are surmounted with courage and resilience. Each and every section of the state is unhappy with the misrule of this government. Today, every section wants to get rid of this government as soon as possible. Every section was looking at the Congress party,” Singh said. “Inflation has broken all records. Industries and businesses had been destroyed due to the failure of this government.

Singh urged people of J&K to reject pro-rich and anti-youth, anti-farmers and anti-poor BJP for ensuring peace and prosperity in the region. He further said that enthusiasm amongst people reflects anti-BJP mood as people are fed up with hollow slogans and lack of development in the areas. He said that Congress has been on fore front to oppose anti- people policies being imposed on people through bureaucrats, as there is no elected Government in J&K for last three and half years. He reiterated that Congress will fight for cause of Jammuities besides restoring lost honour of J&K. He also criticized BJP for its negative policies which have made lives of people miserable in J&K.

Former Minister Manohar Lal Sharma in his address said that the slogans given by the BJP ahead of 2014 polls are now being assessed by the people of the country as all have proved wrong. “While high prices are upsetting budgets of common people on the one hand, on the other communal fires are flaring and BJP is trying to benefit politically from it,” he said. He said people had no representation or forum to raise their voice against the anti-people policies of the BJP. He said that having failed to give employment to a huge percentage of educated unemployed youth, the Centre and the J&K administration were beating about the bush and finding faults in the past governments. Alleging that Jammu and Kashmir has suffered the most under the BJP regime, Sharma asserted that in the run-up to the assembly elections, the Congress will intensify its ideological fight against BJP and its policies towards the union territory. He claimed that so far BJP rule has been of “mismanagement, immense despair and agony” and the country today stands at a stage where the common people are suffering from the wounds inflicted by the government whereas Congress has been continuing its efforts to listen to grievances of aggrieved people in various areas of J&K.

Chairman JKPCC Refugee Cell Vinod Sharma questioned BJP Govt why the assistance full package including financial assistance @Rs 25 lakh per family as recommended by the NC-Congress State Govt which was revised to Rs 30 lakh by Joint Parliamentary Committee (JPC) has not been sanctioned, so far after eight years of BJP rule at the Centre. The BJP repeatedly committed to sanction full package including ex-gratia @ Rs 30 lakh besides reservation to the wards of POK refugees in technical institutions on the pattern of West Pakistan refugees since 2008 in various institutions throughout country. The reservation in Central forces jobs was also part of the package recommended by the then State Government. He demanded immediate fulfilment of commitment by BJP and release of full amount to each refugee family of 1947, 1965 and 1971.

Speaking on the occasion, Pranav Shagota said that NDA Government headed by BJP is shamelessly taking credit of the projects which were started during UPA regime. Challenging the BJP to come up with any project which was started and completed during the last eight years, Shagotra said that some projects which were started during Congress regime for Jammu were also abandoned due to failure of the BJP leadership in the State.He also pointed towards promises made by the BJP leadership with residents of Jammu region but the same are yet to be fulfilled despite passing of eight years. He referred to the Artifical Lake project on Tawi as one such class example.He said that tenure of BJP led NDA regime is only an era of unfulfilled promises because except lip services nothing has been done so far.He said that people of the nation is anxiously looking for bullet train, 15 lakh in the account of every individual, 5 crore jobs, smart cities etc.

Senior Congress leader Ashok Bhagat stressed that the country needed fair and strong constitutional institutions. He said BJP government has left no stone unturned to destroy our democratic institutions. Our country is going through a difficult time. We must all unite and stay alert to fight against this regime,” Bhagat said. He accused ruling BJP Govt of adopting anti-people policies that have ruined every strata of society in J&K. He said farmers, employees, traders, youth were all suffering under the present government.BJP government is playing with autonomy of Institutions by interfering in their working. He said the issue of inflation and rising prices of essential commodities has made life of common man miserable. The life of poor and middle class families has become difficult today due to inflation. Hitting out at the government, he alleged that Govt tenure so far has been marked by misery and misgovernance with high inflation, low employment and communal polarization being the hallmark.