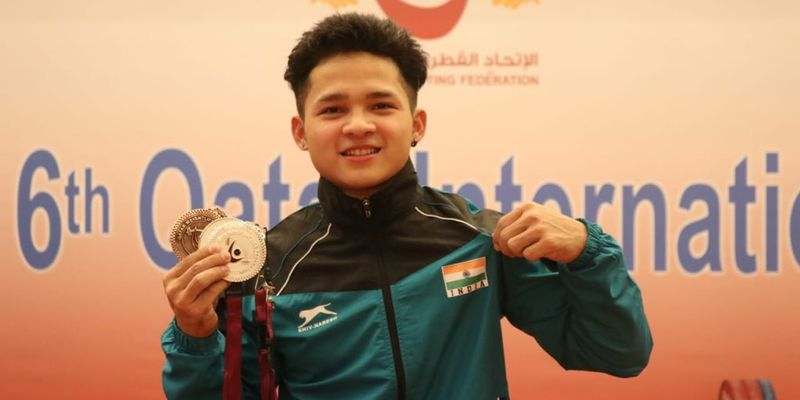 Jeremy Lalrinnunga clinched the second gold medal for India at the Commonwealth Games 2022, by setting a CWG record for snatch in the men’s 67kg weightlifting final. Jeremy, 19, lifted 136kg in his first snatch effort and bettered it by successfully attempting 140kgs in his next try. He then coupled it with a bonkers lift of 160kg in the Clean & Jerk category to finish with 300kg and bring India its fifth medal of CWG 2022.

Jeremy shot into national reckoning when he became the first of three Indiaathletes to win gold medals at the 2018 Youth Olympics with a total lift of 274kg. He was just 16 years old at the time and he entered the weightlifting World Championships the next year, finishing with a ranking of 21 in the men’s 67kg event.

Jeremy’s first, and thus far only senior international title, came in the form of the 2021 Commonwealth Championships in Tashkent. He lifted an impressive total of 305kg (141kg and 164kg) to win top honours at the Commonwealth meet. Lalrinnunga was just 1kg shy to improve his personal best which stands at a national record of 306kg (140kg, 166kg). His snatch effort of 141kg was a new national record and he already held the clean and jerk record of 167kg as well. He lifted a total of 305kg in the 67kg event, thus winning the gold medal ahead of Nigeria’s Joseph Edidiong.
The 19-year-old struggled has been struggling with back and knee injuries since the December 2021 event and was out of action for much of the competitions after that. That gold medal in Tashkent, however, was enough for him to confirm qualification to the 2022 Commonwealth Games in Birmingham. Jeremy holds the three National Records – snatch 141kg, clean and jerk 167kg, total 306kg – in 67kg. He has been training in Birmingham for over a month now and has insisted before that his injuries are behind him.