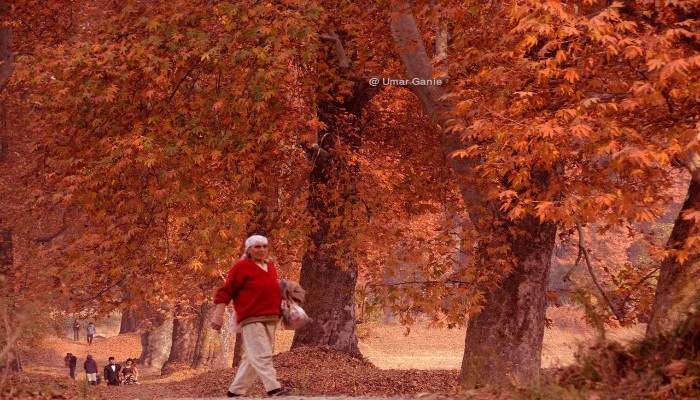 A new spring is taking birth in the 2020 autumn of Kashmir . The golden colour of Chinar leaves has enlivened the season for tourists who have rushed to the Valley in hordes looking for all these beautiful colours and snow in mountains. Added to this , strings of music of vibrant democracy are making these times more exciting – the campaign for the District Development Polls is setting new trends. The wait for the new spring has infused new hopes and excitement . The democracy is being embraced like never before- a Modi-Amit Shah effect has cast a new spell in which hope is flourishing.

If the tourists are visiting with a sense of ease and peace in the environment of the Valley , the locals are feeling a new sense of bonding and belonging with the rest of the nation . This is a magic moment in Kashmir.

They know that all this is because of Prime Minister Narendra Modi and Union Home Minister Amit Shah’s leadership . Their vision for Kashmir has started unfolding as the terrorism is in retreat and the grassroots democracy is taking its roots very firmly.

“ If the economy booms, everything else will follow, the political stability and confidence among the people about themselves and their lives in future,” said Khalid Mohammad , a shopkeeper in Dal Gate area. The problem has to be understood in its proper perspective instead of through coloured prism , he said and analysed it like this: “ If our children are in helpless situation , what use is Article 370. Its abrogation has made it clear to us that either we continue to stay as hostage to the political slogans or look realistically toward our future.”

There is a change in the mood . “ Yes, it gave us some sense of artificial empowerment that we are different from others , but at the end of the day,” said Abdul Rashid, a hosiery seller at Sunday market near Polo Ground ,” we are all humans, our needs are same .” The narrative of the empowerment and the distinct identity was false as this did not add richness to the living of the people of Kashmir that they deserved. This narrative is taking shape within and finds an expression.

It rests on two basics : one that economic needs cannot be suppressed for the illusive politics , and also that without stability in their lives , they will be answerable to their children as to why didn’t they take a right decision . The illusions get decimated when stark realities stare at them.

The people have started realising that it is futile to fight for a failed cause. They know that not only the government at the Centre, today, tomorrow or day after , will not change anything , but also there is a strong feeling across the nation against Article 370 and 35A. It has dawned on them after they dug into the history “ For 22 years , Sheikh Abdullah and his party National Conference that had renamed itself Plebiscite Front, and finally, he returned to a much-demoted position. That is what is known to them that Prime Minister Sheikh Abdullah negotiated for the position of the Chief Minister when he returned to power in 1975
“ If at that time they could not do anything , today the Centre is much stronger , how can they reverse the clock,” asks a Shakeel Ahmad Lone who is a taxi driver . He had learnt all this from his grandfather Ali Mohammad Lone.

This is getting connecting to their daily home narrative .
They say that they need to be trusted . Once that is done , all our problems will start disappearing.