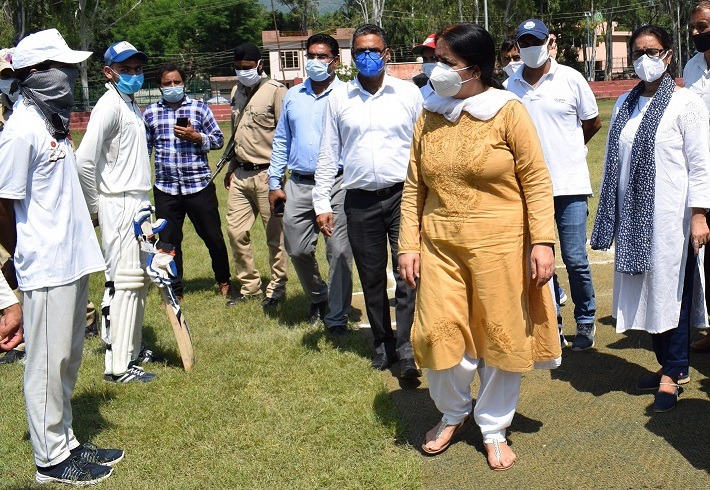 District Level Inter Zonal U-19 Cricket Tournament was today inaugurated by District Development Commissioner, Indu Kanwal Chib here at a simple but impressive function.
The tournament is being organised as a part of Annual calendar of activities by District Youth Services & Sports department.
All the Standard Operation Procedures are being strictly followed during the conduct of the tournament.
The inaugural match was played between Reasi Zone and Mahore Zone. Reasi won the toss and elected to bat first. Batting first Reasi scored 115/3 in stipulated overs, Nasser Hussain & Ayush scored 47 & 13 runs respectively while Shabaz was the lone wicket taker for Chassana Zone,
Chassana zone was all out at 83 runs and lost the match by 32 runs.
Naseer Hussain of Reasi Zone was declared the Man of the Match.
Earlier, in her inaugural address, Indu Kanwal Chib highlighted the importance of Sports for the well being of an individual. She also announced to provide sports material worth Rs twenty thousand out of Rs 10 Lakh grant provided by the government for each Panchayat for B2V-3.
In his welcome address, the DYSSO, Subash Chander Sharma, apprised that the District level Inter zonal tournament will also witness competition in Football, Kho-Kho, Volleyball and Badminton being held from 31-08-2020 to 26-09-2020.
The matches were officiated by Sandeepan Sharma, Kuldeep Raj, Jagdev Singh, Ankush Sharma, Goutam Koundal.