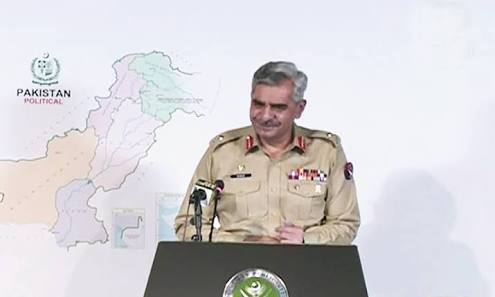 On the eve of Independence Day  in India , President of the Republic addresses the nation , maybe it happens in Pakistan  too . But before that some extraordinarily strange things happen in the neighbouring country – the military talks about the domestic and foreign policy. This has taken away all the pretensions of  Pakistan having any civilian government .

On the evening  of August  13 , Director General of Inter-Services  Public Relations  Major General  Babar Iftikhar addressed a media conference to brief the media persons  about what Pakistan is doing or plans to do . He is not talking about the military affairs nor is there any internal or external emergency in Pakistan at the moment to call for such an action on the part of Pakistan army to start its own narration of Pakistan .

Predictably , the opening of the media conference  was made with unending  verbosity  on Pakistan’s role in  internationalising  Kashmir issue- three time UNSC meeting ( he did not tell that  it was a closed door one and no resolution was passed and not even a formal briefing was held) write ups in international media and a few leaders who spoke of the alleged human rights violations in Kashmir .

This is something that Pakistan Foreign  Minister Shah Mehmood Qureshi had spoken  of on a number of occasions , and  after finding that his rhetoric had no takers , not even in the 57-member Muslim block Organisation of Islamic Cooperation ( OiC), he  dared Saudi  Arabia . Qureshi thought that his threat of blackmailing Riyadh by  calling a session of  Council of Foreign Ministers ( CFM) of OIC  would be taken as an act of bravery . But it turned out that Saudi Arabia, he was inflicting diplomatic, political and economic wounds on Pakistan itself .

These fault lines are now being repaired by the Army, because Saudi  Arabia seems to have given up  on the civilian government  of Prime Minister Imran Khan  and demanded action from the real power- the army. Chief of Army Staff Gen. Qamar Javed Bajwa is going to Riyadh after few days to untie the knots that have been brought by Qureshi and likes of him.

That has left the field open for the army to take over  Pakistani establishment all to itself .