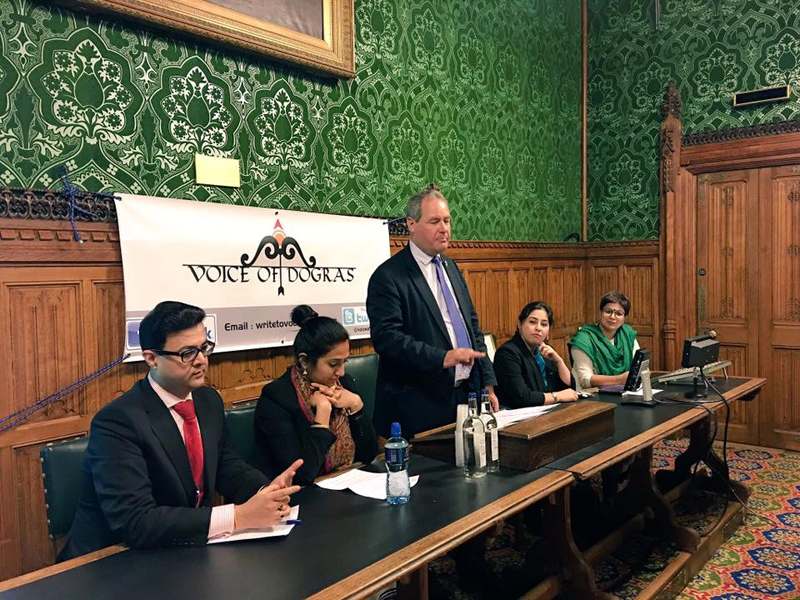 Jammu, October 12: Voice of Dogras (VOD), a community of the Jammu & Kashmir diaspora, commemorated the 121st birth anniversary of Maharaja Hari Singh, the last ruler of Jammu & Kashmir at the House of Common in the UK Parliament on Tuesday.

The occasion was a unique opportunity to not only celebrate Maharaja Hari Singh’s legacy and contribution to Jammu & Kashmir but also provide insights into the history of Dogras and their role in assisting the UK in world war 1 & 2.

In the current situation with international focus on Jammu Kashmir, this event is historical, because not only do we look at how the Dogra Dynasty founded, served and held together the extremely diverse state of Jammu and Kashmir, but it also had presentations by respected members of the Pakistan Occupied Jammu Kashmir (POJK) community. This is the first time that the views of the POJK community on the Dogra Rule, Jammu Kashmir and the reasons for their affection towards Maharaja Hari Singh came forward on an international platform.

Bob Blackman, Conservative MP for Harrow East and the special guest for the evening said, “We are delighted to host an event that honours the memory of Maharaja Hari Singh, the last ruler of Jammu & Kashmir. A great reformer and a great leader of his people, we honour his memory and his family. We look forward to the whole Jammu and Kashmir being reunited as the crowning glory of India.”

The event also put forth the much neglected perspective of POJK (Pakistan Occupied Jammu & Kashmir) diaspora for the first time in the UK. A major part of the Jammu and Kashmir territory has been occupied Pakistan and China, which has had a negative impact on the residents of POJK and their voice, has been often unheard and even ignored.

Providing an overview of the situation, Sameena Raja a Writer and activist, and a Mirpuri from  POJK said, “This is a misconception or an intentional manipulation of history to claim that he couldn’t defend his Homeland against a few Tribals from Pakistan in 1947 and acceded to India to save himself. In fact Maharajah Hari Singh only acceded to India to stop further slaughtering of innocent civilians at the hands of Pakistani armed forces and invading Tribals. Had he not taken the timely step to accede to India (conditionally though), not a single non Muslim would have been alive in the State of J&K.”

Maharaja Hari Singh’s legacy left a mark on both the history of the Indian subcontinent and the world. A true visionary, he stood for India’s independence during the Round Table Conference of 1931 and was the first ruler of a princely state to speak of ‘Mother India.’ He played a crucial role in providing both monetary and military support to the British forces in both WW1 and WW2, thereby cementing his contribution to world peace. His reforms within the state of Jammu & Kashmir are still celebrated as a triumph of administrative prowess. Following the India’s independence and the events of 1947, it was Maharaja Hari Singh  who signed the ‘Instrument of Accession,’ making Jammu and Kashmir an integral part of India.

Acknowledging the importance of such a commemorative event, Yuvraj Vikramaditya Singh, leader of Peoples Democratic Party and grandson of Maharaja Hari Singh said, ” The fact that the Dogras rulers successfully administered and held together people of such diverse culture, region and beliefs for 100 years (1846 to 1947) needs to be acknowledged and appreciated. As the grandson of the man who on his coronation day proclaimed, “Justice is my religion & all religions are mine”, I have always strived to keep these values alive.” He added, “Maharaja Hari Singh has become an inspiration for thousands of people in Jammu Province who are looking to regain lost  pride and identity. It is my endeavour and I consider it my duty, not to get lost in an era gone by, but to use his values and symbols as inspiration  to take our State forward”

The event saw presentations by Dr Shabir Chowdhury from POJK who is also the Chairman Institute of Kashmir Affairs, Writer TV Anchor and Author.

Faria Atique, from POJK and In Charge of Human Rights, UKPNP shared a personal account of the Maharaja’s times pre 1947. Maharaja Hari Singh- More than a Hindu King who ruled over a Muslim majority State was a Paper Presentation by Manu Khajuria, Founder Voice of Dogras Community Activist and Freelance Writer. Lakshmi Kaul, KP Community Leader also spoke on this occasion.