Drugs worth around ₹1,920 crore destroyed by Assam Police in Cachar 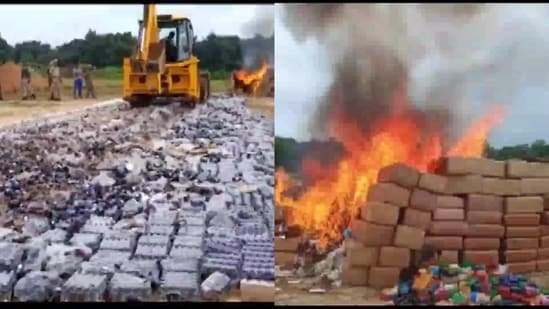 The Assam Police on Saturday destroyed a huge quantity of drugs worth around ₹1,920 crore recovered in multiple raids conducted across Cachar district. According to the police, about 6.214 kg of heroin worth ₹31.07 crore, 683 kg of ganja worth ₹1,751 crore, 271 kg of cough syrup bottles worth ₹16.26 crore, and 6.04 lakh pieces of Yaba tablets worth ₹120.80 crore were destroyed as a part of its massive contraband drugs disposal programme.

The international market value of the total drugs destroyed by the police was estimated at ₹1920.02 crores. DIG Kangkan Jyoti Saikia said that the operations against the drugs, launched on the instructions of chief minister Himanta Biswa Sarma, will continue.

“The drugs worth ₹1,920.02 crore were destroyed here today. From 10 May 2021, we have launched operations against drugs as per the instructions of the chief minister and our operations will be continued,” DIG Kangkan Jyoti Saikia said.

Harmeet Singh, Commissioner of Police, said, “The chief minister of Assam has given clear instruction to wage this war on drugs until it’s completely cleaned up. I want to take this opportunity to reaffirm our absolute commitment in the war on drugs and nobody related with drugs trade will be spared. Strong legal action shall be initiated against anyone indulging in drugs trade.”

“This is historic and has never happened in country where disposal of seized illicit narcotic substances is taking place across country (at 4 locations) on direction of Union Home Minister Amit Shah. Drugs worth ₹100 crore have been burnt today,” he added.

Drugs worth ₹68 crore were also destroyed in the Assam’s Karimganj district. Similarly, a large quantity of seized drugs were destroyed in Biswanath and Hailakandi districts.