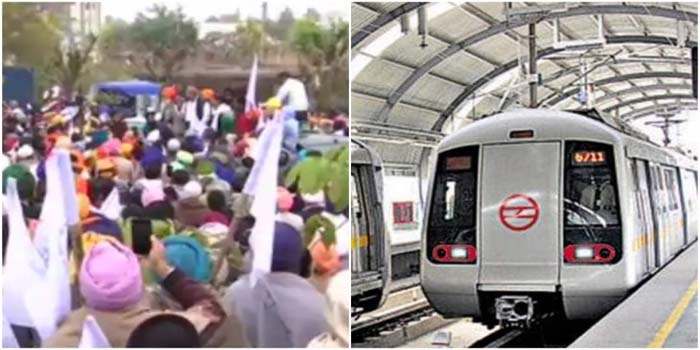 Farmers have announced Mahadharna in Delhi today. Farmers of Punjab, Haryana and Uttar Pradesh are scheduled to reach Delhi on Thursday in protest against the agriculture bills.

Farmers have given the slogan of ‘Delhi Chalo’ for this. Many organizations including All India Kisan Sangharsh Co-ordination Committee, Rashtriya Kisan Mahasangh, Bharatiya Kisan Union have called this march. At the same time, the Delhi Police says that if farmers gather in Delhi during the Corona transition, then legal action will be taken against them. The Delhi Police has turned down all demands of farmer organizations to hold demonstrations in the capital.

The government has appealed to avoid going towards the Delhi border today. Do not leave the house if it is not necessary.  The protesters will reach Delhi via four major national highways, Ambala to Delhi, Hisar to Delhi, Rewari to Delhi and Palwal to Delhi. In such a situation, traffic jams will be more than that on other days. The All India Kisan Sangharsh Coordination Committee said that wherever the farmers will be stopped, they will sit there and continue their protest. The farmers  also said that they will express their opposition under any circumstances. In such a situation there is a possibility of traffic conjestion on the routes.

In view of the protest of the farmers, the Delhi Metro has made some changes in its timing. There will be a break on metro services from Delhi to Noida, Faridabad, Ghaziabad and Gurugram till 2 pm. According to DMRC, Metro services will be closed from Anand Vihar to Vaishali and New Ashok Nagar to Noida City Center on the Blue Line from morning to noon. On the Yellow Line, services will also be closed from Sultanpur metro station to Guru Dronacharya metro station.

Farmers marching from Punjab and Haryana to Delhi are scheduled to reach the capital today. Farmers from nearby states can also reach Delhi. Security has been increased along the Delhi-Haryana border in view of the farmers’ demonstrations in Delhi. Here, Haryana has also sealed it’s border with Punjab. Keeping the farmers’ movement in mind, an alert has also been given in western Uttar Pradesh. Delhi-bound borders at Baghpat, Ghaziabad, Noida can be sealed at any time.

Intelligence-security agencies have been put on alert in view of the farmers agitation . According to the information, the police-administration is preparing to not allow farmers to reach Delhi. At the same time, there is also a preparation to keep farmer leaders under house arrest. Indian Farmers Union (EU) General Secretary Sukhdev Singh said that 25 thousand women and 4000 tractors will be involved in this protest march. This organization said that about two lakh of their members will enter Haryana from Khanouri and Dabwali.