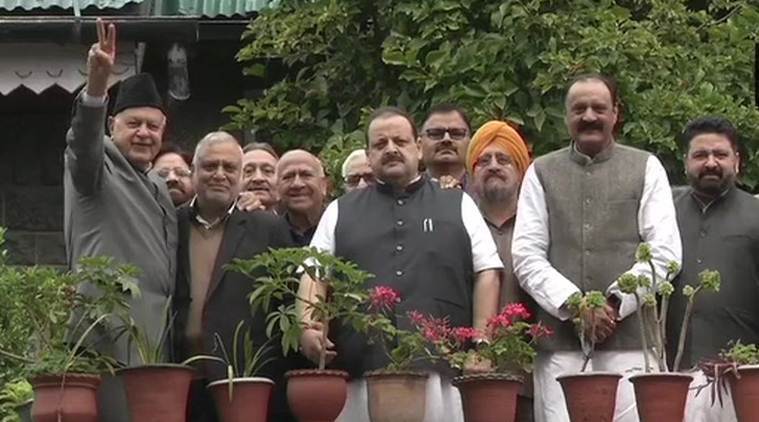 Mr Rana said that Dr Farooq Abdullah and Mr Omar Abdullah were in high spirits, but pained and anguished over the prevailing situation.

While talking to the waiting media persons, Mr.Rana pitched for immediate release of political leaders of all maintstream parties to restore the democratic process in the
State.

When asked about the future political strategy of the party, Mr Rana said that as and when the detained party leaders are released the Working Committee, which is the apex body of the party, will sit and have a detailed review of the situation and developments taking place and decide political roadmap for the party.

To a question by a reporter on the proposed elections to Block Development Councils, Mr Rana quipped: “How can we even think on these lines at this juncture as the party leadership is under detention. Elections are contested by adopting a process, which entails selection, consideration and nomination of candidates. This is not possible in the prevailing situation when the party leaders from the State President down below to Block Presidents are under detention in the Kashmir valley. He said the BDC polls are being fought in 316 blocks and if any political party has to contest these elections it is required that 316 Blocks are politically functional.

To another question, Mr Rana reiterated that National Conference will continue to strive for communal harmony, peace, unity and preserving the pluralistic ethos of Jammu and Kashmir, a shining and glorious legacy bequeathed by Sher-e-Kashmir Sheikh Mohammed Abdullah. He said the party has all along worked towards safeguarding the rights, culture and identity of the people besides fulfilling their aspirations, which it will continue  to do. He said welfare and well-being of the people of Jammu and Kashmir has been guiding philosophy of National Conference and the party will work towards this objective single-mindedly and with a sense of commitment.

Mr Rana and the other members of the delegation wished Dr Abdullah and Mr Omar Abdullah all the well, saying the entire cadre across the State is standing behind them like a rock.

The delegation had separate meetings with the detained President and the Vice President, which lasted 30 minutes each.

The Jammu and Kashmir Government had permitted the delegation to meet the detained leaders after a request was made to Governor Mr Satya Pal Malik soon after the lifting of restrictions on the movement of Jammu based prominent leaders.