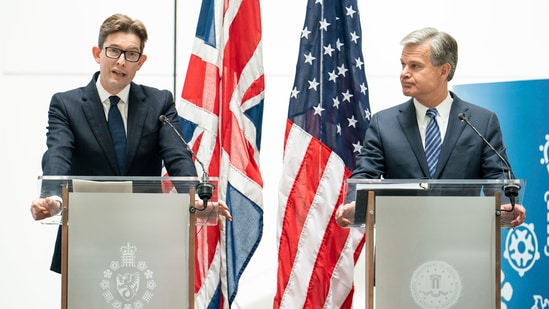 FBI Director Christopher Wray and United Kingdom MI5 Director General Ken McCallum on Wednesday cautioned business leaders against threat from the Chinese government, in an unprecedented joint address at the British intelligence service’s London headquarters. The top domestic security service officials said the threat from Chinese spies is paramount in both countries and only continues to grow.

Speaking to an audience of officials and business executives in Thames House, Wray talked about “complex, enduring, and pervasive danger” to the innovative businesses from China.

“We consistently see that it’s the Chinese government that poses the biggest long-term threat to our economic and national security, and by ‘our’, I mean both of our nations, along with our allies in Europe and elsewhere,” he said.

While the security officials understand the appeal of doing business in and with China, the FBI director said, the Chinese government “poses an even more serious threat to Western businesses than even many sophisticated businesspeople realize.”

Elaborating on what the danger looks like, Wray asserted that the Chinese government “is set on stealing your technology—whatever it is that makes your industry tick—and using it to undercut your business and dominate your market.”

“I know this all sounds alarming. But while the threat is immense, that doesn’t mean harm is inevitable.”

Adding to it, McCallum said most of what is at risk from Chinese Communist Party aggression is “the world-leading expertise, technology, research, and commercial advantage developed and held by people in this room, and others like you.” Covert theft, tech transfer, and exploiting research were some of the ways highlighted by the MI5 chief that China could use to acquire advantage.

“The Chinese Communist Party is interested in our democratic, media and legal systems. Not to emulate them, sadly, but to use them for its gain,” said McCallum.