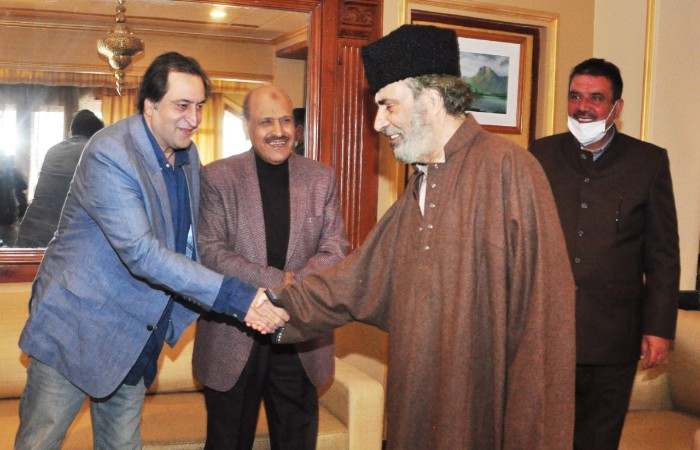 J&K Peoples Conference Chairman Sajad Gani Lone accompanied by senior party leaders today visited the residence of  Muzaffar Hussain Baig, former Deputy Chief Minister and one of the most prominent leaders of J&K. They confabulated with Mr. Baig on a range of issues afflicting the people of J&K in these difficult times.

Sajad Lone on this occasion invited  Baig to once again return home and be a part of the party from where he started his political career. He impressed upon  Baig that the need of the hour is that people like him should share their experience, expertise, knowledge and political wisdom for the betterment of J&K.

Baig keenly participated in the confabulations and after detailed discussion expressed his pleasure in being able to be a part of the party from where he started his political career. He said that it gives him immense pleasure to be a part of the party which he joined as a youth and was groomed by Late Abdul Gani Lone sahib. Today he has the opportunity to yet again groom leaders like Sajad Lone and many others to take up leadership role in the future times to come. Baig said that in his entire public life he had causes for being happy and many causes where he was disappointed where he felt that he couldn’t do enough or didn’t have time to do enough. But he felt that apart from many problems plaguing J&K, one of the biggest problems is the quality of leadership. He said that quite often he found that the leaders didn’t have the requisite exposure or the capacity to be able to contribute at a scale and at a level that he or she is supposed to do. He expressed his great desire to contribute by grooming youngsters and building their capacity to a level where they can actually rise up to the occasion and rise up for the people of J&K.

Lone thanked Baig and reiterated that the entire party looks up to him and believes that at this juncture  Baig has a great role in helping the people of J&K to navigate the turbulent and treacherous waters.