From Congress to BJP: Who gained and lost from no-confidence motion 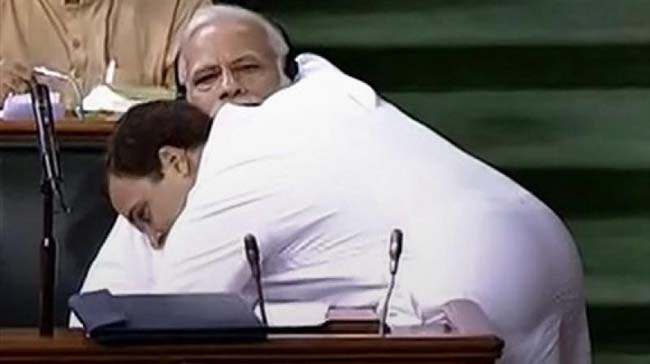 The NDA government cruised to an over a two-thirds (at 72%, close to three-fourths) majority in the house, decisively defeating a no-confidence motion, even as Prime Minister Narendra Modi set the stage for the 2019 elections.

The no-confidence motion hardly threatened Narendra Modi’s four-year old government, but it presented an opportunity for all political parties to position themselves for the 2019 Lok Sabha elections. Here’s an analysis what the parties sought to gain from the no-confidence vote.

Given that it was certain the outcome would be adverse, the Congress’s entire aim with the no-confidence motion was to attack the government and project Rahul Gandhi as a formidable leader. The party emerged with high morale, convinced that Gandhi – with both his confident and aggressive speech and him hugging Prime Minister Narendra Modi – had stolen the limelight. The challenge for the party would be to now translate the momentum into electoral wins.

The BJP came out a winner in Friday’s vote. It beat its own target of a two-thirds majority and exceeded 70% of the house. The party did suffer jitters in the afternoon when Rahul Gandhi launched a personalised and aggressive attack. But with PM Modi’s speech, the party felt it had recovered the narrative. Party chief Amit Shah tweeted that the win was a precursor to the 2019 elections.

The Shiv Sena stayed out of the proceedings as well. After first deciding to support the government on Thursday afternoon, then pulling back the same evening, and finally deciding to boycott the motion and the vote entirely, the party’s swings reflects its complicated relationship with the BJP. It is an ally in government at the Centre and in Maharashtra. Yet, it is resentful and believes BJP has squeezed its space. It is not in, but it is not out yet.

Tamil Nadu’s ruling party voted with the government. The party’s proximity to the BJP, especially after the death of Jayalalithaa, was an open secret. It has supported the NDA on key political and policy issues, directly and indirectly. It was widely expected they would abstain. But the open support will have implications back in Tamil Nadu, where AIADMK is divided and faces external challengers.

The TDP had triggered the debate in the house with its motion. It will not be entirely pleased that the discussion revolved around a range of issues that had little to do with granting Andhra Pradesh special category status. But the fact that Parliament debated a TDP motion would help the party project to its constituents back home that it had challenged the Centre and Delhi for the interests of the state.

TRS did not participate in the voting. The root of Friday’s vote lies in the creation of Telangana, the resentment in Andhra and a special category status. TRS made it clear that since the issue was Andhra-specific, they had little to do with it. But its stand would add to speculation that TRS had some kind of understanding with BJP. At the same time, TRS’ chief K Chandrashekar Rao has also positioned himself as a leader of the Federal front.

The BJD walked out of the house. Its move was a classic reflection of Naveen Patnaik’s political style. He is a ferocious, even if understated, political warrior back home in the state. But he sees little point often in getting entangled into political battles in Delhi, with limited electoral resonance in the state. Even though BJD now confronts an aggressive BJP in Odisha, the move was seen as implicitly supportive of the government.