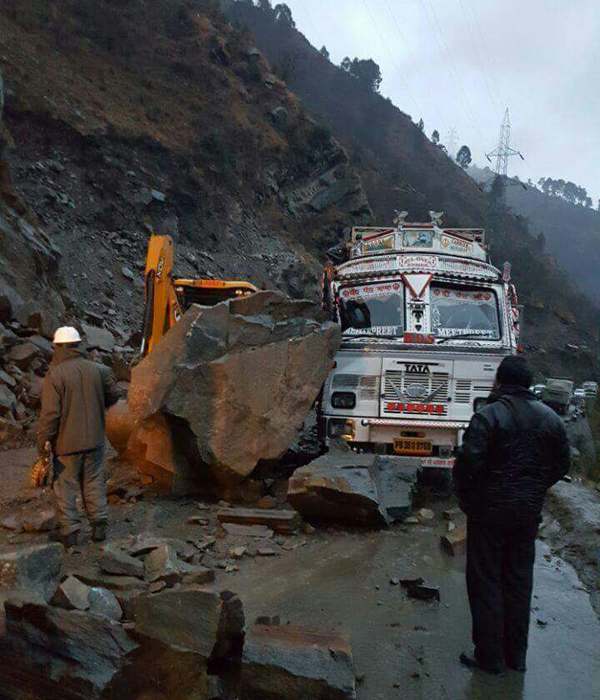 Questions wisdom of continuing with cutting work along Banihal-Ramban sector

Calling into question the continuation of rock cutting work along Banihal- Ramban portion of Srinagar- Jammu National Highway, a high-level expert panel set up by the NHAI has come up with a slew of interim measures to minimise the threat of landslides which frequently shut the vital road.

In its report, the team comprising Dr RK Bhandari, ex-Director CSIR-Central Building Research Institute; Prof DN Singh, Indian Institute of Technology, Bombay; and AK Srivastav, former Additional Director General, Ministry of Road Transport and Highway, has called for an all-out effort on war-footing to deal with the problem of landslides and meet “foreseen emergencies for  keeping the highway open”.

The panel has suggested that that all surface drains across the 36-kilometre Ramban–Banihal stretch, the portion where threat of active landslides is “imminent”, should be made functional.

It has also recommended constitution of a task force to create alerts, monitor the sites of active landslides and attend to the emergencies.

The panel has questioned the cutting work, which is triggering frequent landslides and rockslides on the highway. “Without going into the administrative, financial and legal aspects of the project, purely from the professional angle, there are enough evidences to suggest that it is time to take the message delivered by new landslides . . . and question the wisdom of continuing with the cutting work, ” the report reads.

In its report, the expert committee states that problems on the stretch could have been comprehended during the initial phase of construction.

“It is quite clear to the members of these committees that the problems staring us in the face could have been comprehended in the first place; the problematic stretch of the highway being located in an ecologically fragile terrain of highly disturbing landslide history over a period of decades. Even if the project had to be launched in view of its great national importance and mounting demand, the problem we face now could have been comprehended based on the slope failure and new landslides during the initial phase of construction,” the two-page report states.

The committee, which visited the vulnerable portion of the highway on May 20, is expected to submit a detailed report soon with definite recommendations.

Since November last year, the highway has remained frequently closed due to landslides and rockslides triggered among other things by the cutting work being carried out in Ramban –Banihal portion for four-laning of Srinagar- Jammu National Highway.

The Centre and the State governments have come under criticism from different quarters for failing to upkeep the vital highway connecting Kashmir with outer world.

The intermittent closure of the highway has led to shortage of essentials in the Valley.