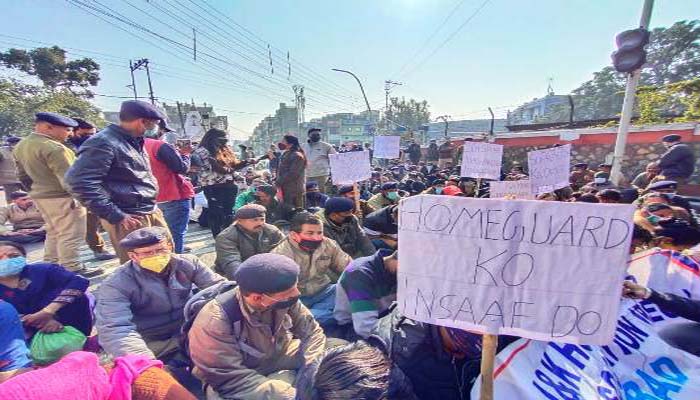 Hundreds of home guards on Wednesday staged a protest outside the Raj Bhavan here in support of their various demands including regularization of their services and fixation of their salaries as per the Supreme Court order.

The protesters, both men and women, were carrying placards and chanted slogans during an over hour-long sit-in demonstration during which they invited the attention of Lt Governor Manoj Sinha and requested him to address their long pending demands.

“A home guard is paid Rs 2,700 per month which is in violation of the 2017 Supreme Court ruling that the principle of ‘equal pay for equal work’ has to be extended to those engaged in ad hoc or contractual work,” All J&K Home Guards Welfare Association president Kamla Sharma told reporters.

She said they have been rendering their services to the government for the last two decades and have highlighted their various demands, but no action was taken, forcing them to stage a sit-in here.

“If our demands are not met, we will move to the union capital to stage a protest outside the Parliament during the upcoming session,” Sharma said.

The association Chairman Babu Hussain Malik, who was leading the protest, said the home guards are facing “injustice” as they are providing their services for a meagre amount which has pushed them into poverty with the future of their children at stake.

“The government must immediately implement the Minimum Wages Act in the Union Territory and also chalk out a strategy to ensure early regularization of agitating workers and casual labourers,” he said.

The home guards are also demanding fixation of their salaries in accordance with the Supreme Court order and other service benefits provided to their counterparts in other states and UTs like Delhi.