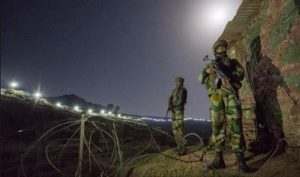 A BSF spokesman in a statement, said that the force besides manning LoC in Kashmir is also deployed for ensuring VA/VP duty, safety/security of people, with full zeal and devotion.

He said that during the year 2022, based on BSF intelligence, number of joint Operations were successfully launched in synergy with sister agencies, resulted in neutralization of 20 terrorists (10 Local & 10 Foreign Terrorist), apprehension of 02 confirmed terrorists and 03 suspected persons and recovery of large quantity of war like stores including AK series Rifle – 24, M series – 02, Pistol/Revolver – 20 alongwith their accessories, Grenade – 27, more than 2500 live Rounds along with 02 Kgs of Explosives, IEDs – 04 & around 11 Kgs Narcotics.