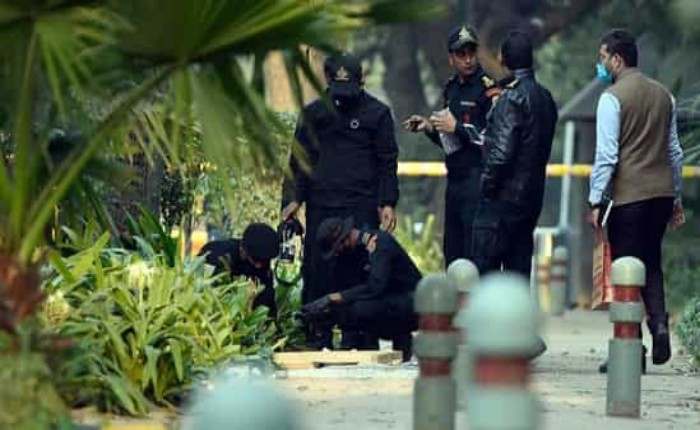 Investigations by Indian security agencies into the improvised explosive device (IED) blast outside the Israeli Embassy on Friday evening are still not conclusive but the needle of suspicion is pointing towards Iran with local involvement.

According to counter-terrorism officials in New Delhi, there is enough to suggest the involvement of Tehran in the blast, although investigators are still looking for the people who actually planted the bomb.

“Deliberate efforts have been made to firewall the real prepetrators behind the terror incident with false flags and deniability built into the attack that obviously was carried out at the behest of Iran,” said a senior official who asked not to be named.

Queries to the Iranian officials went unanswered at the time of going to press.

New Delhi has taken the heinous attack against Israel very seriously and its position is that India cannot be used by any other country to target its perceived enemies. India has close ties with both Israel and Iran, although the two countries, in turn, are enemies. “ Once we have concrete evidence we will take up the matter in very serious terms with the country behind the attack,” said a second official in know of the entire investigation who too asked not to be named.

The current investigations, counter-terror officials said, are focused on Indian students who have returned after studying at Qom, one of the holiest cities in Shia Islam, in Iran. The focus is on a particular city in south India and a Shia dominated city in Afghanistan, the officials added.

After the IED exploded around 5.11pm, the investigators recovered a letter addressed to Israeli Ambassador to India, Ron Malka.

The letter was addressed to “ The Terrorist, Devil of Terrorist Nation Dr Ron Malka” and was written by someone who identified himself as Sarallah India Hezbollah. While Ya Sarallah means one who is dead but has not yet been avenged, Hezbollah is the Shia Islamist political party in Lebanon with a sword arm — a sworn enemy of Israel. The letter swears revenge for the killing of Iran Quds Commander Qassem Soleimani, and Abu Mehdhi Al Muhandis, who were killed in a US drone attack in January 2020, and Iranian nuclear physicist Dr Mohsen Fakhrizadeh, who died in a car bomb attack in Iran in November 2020. The contradiction is that Al Muhandis was very close to Soleimani and fought against ISIS.

The letter reads : “ This is just a trailer presented to you, that we can observe you, from eating to …..Mind it, all the participants and partners of Israelian terrorist ideology will be no more in existence. Now get ready for a big and better revenge of our heros (Soleimani, Muhandis and Fakhrizadeh).”

The letter claimed that the group has the capacity to “end your life” anytime and that Israeli terror shelters would be destroyed. It ended by saying : “ All you have to do (is) just count your days now.”

Malka said he would not like to comment on the letter and would leave the investigation to India.

Despite the letter making such tall claims, the IED itself was very basic in nature with ammonium nitrate-fuel oil as main charge, a non-electrical detonator and bicycle ball bearings as shrapnel. According to the counter-terror officials, it did not appear to be the creation of an expert bomb maker but that of some one who was guided to make a device through a cyber handler.

Given that an Iran link was being established through the recovered letter, external affairs minister S Jaishankar talked to his Israeli counterpart, as did the National Security Advisor Ajit Doval. Doval made a call and briefed the Israelis despite being abroad on a visit.

The matter could take a serious diplomatic turn, South Block officials said. This is not the first time Iran has been involved in an attack of this kind in India. Three Quds agents through an Indian conduit targeted the wife of the Israeli Defence Attache on February 13, 2012 with a magnetic bomb. While the agents managed to escape, the then UPA-regime discreetly rapped Iran on its knuckles and told it not to repeat this again in New Delhi.

Once it finds concrete evidence, the Narendra Modi government will send a strong message to Tehran, the South Block officials added.