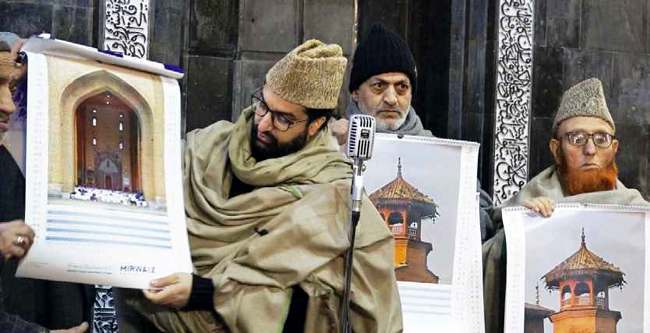 The idea was to make youth aware of Islamic history: Mirwaiz

An inclusive portrayal of the historic Jamia Masjid in the form of a calendar has created a buzz in the Valley as 10,000 copies were distributed within six days compelling organisers to print more.

The calendar prepared by Anjuman-e-Auqaf Jamia Masjid under the aegis of Mirwaiz Foundation, provides a close glimpse of the Grand Masjid.

Coming up with the new concept, the calendar has focused on columns, brick walls, minarets, doors and windows of the Jamia Masjid.

The calendar has been shared on various social networking sites in digital form and has become an instant hit with netizens expressing eagerness to grab a copy of it.

The popularity of the calendar could be gauged from the fact that after its release last Friday, it is already out of stock.

Talking to Rising Kashmir, All Parties Hurriyat Conference (M) Chairman and patron Anjumane-e-Auqaf Jamia Masjid, Mirwaiz Umar Farooq said the idea behind the calendar was to make youth in Kashmir aware about their Islamic history.

“There are people who say that Kashmiris have no history of its own. So we wanted to come up with something that reflects our Islamic architecture to educate people, especially youth, about our (Kashmiris) Islamic era,” the Mirwaiz said.

He said the calendar was prepared with great care and meticulous attention to details before it was published.

“We hired blacksheep and K2 imageaxis, who are professionals to work on design and picture for this project,” the Mirwaiz said.

He said given the popularity of the calendar, they were printing more copies.

“Initially we had printed around 10,000 copies but with popular demand we are printing more copies for distribution,” the Mirwaiz said.

He said though the cost of the calendar was Rs 100, it was distributed free among people.

“For those willing to pay for it, their proceeds will go to Dar-ul-Khair, an organisation working for providing economic support to the underprivileged,” the Mirwaiz said.

Commissioned by Sultan Sikandar in 1394 CE and completed in 1402 CE, Jama Masjid, apart from being an important religious place, has been an epicentre for raging political discourse in Kashmir.

Over the years, the State government under successive regimes has put curbs and gags on Friday congregation prayers at the Masjid.

“It is important that on one hand when we are fighting for our identity, on the other hand those identities are preserved,” the Mirwaiz said.

Apart from Islamic and Gregorian dates for 2019, the calendar has mentioned all important dates related to Islamic functions and events.

It includes prayer timetable (Meeqat-e-Salah) including Iftaar and Sehri timings.

The Mirwaiz said the next edition of the calendar would include all other religious places in the Shehar Khas (Srinagar downtown) and special focus would be on the calligraphy and engineering used to build these Islamic monuments.

“Our focus will be on columns, brick work, minarets along with other essential components of a religious place,” he said. “We are also planning to hold a photography contest of our religious places with an assigned theme, where young photographers can submit their work to be printed in the next calendar.”