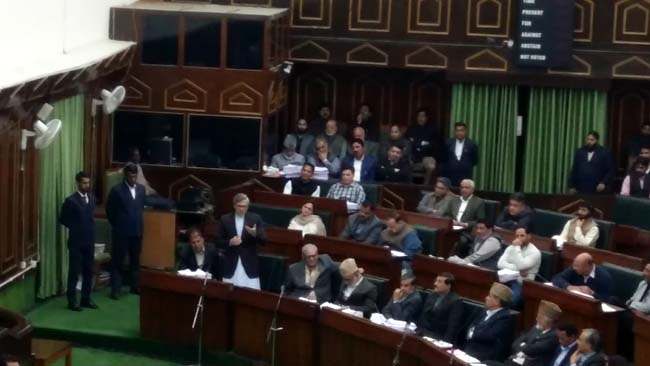 The Jammu and Kashmir Appropriation Bill-2018 moved by the Finance Minister Dr Haseeb Drabu in the House in this regard was passed with voice-vote.

Pertinently, for the first time in J&K’s legislative history, the Finance Minister has linked the Appropriation Bill with wide-ranging expenditure reforms to ensure checks and balances for efficient fiscal management and speed up spending to make productive use of resources for the larger public good.

He said the administrative departments shall, in turn, ensure release of funds to the subordinate offices within four weeks of their receipt, failing which these funds shall be deemed to have been transferred to the intended DDOs on the dates they ought to have been released by the administrative departments /Controlling Officers. “Planning Development and Monitoring Department shall ensure that all plan allocations to be made in the next fiscal bear proper classification, indicating, name of the work/scheme against detailed Head-115 Works,” he said and added that in the absence of the schematic classification, the relevant Capex release shall be deemed as invalid and not open to being operationalization.

The Finance Minister said there no payments shall be made by any Treasury/PAO from 1 April 2018, under any expenditure head, if the releases for the same have not been made and further received by the spending and bill passing Officers via BEAMS. “Treasury Officers/PAOs shall be personally liable for making payments on the funds released and received bypassing the BEAMS application,” he said.

Dr Drabu said the State Share of the Centrally Sponsored Schemes and the expenditure to be incurred on utility shifting, land compensation etc under PMDP projects shall be the first charge on the funds lapsing to the Government during the last quarter.

The Finance Minister made it clear that there shall be, henceforth, no engagement of casual workers, need-based workers etc by any department. “The Planning, Monitoring and Development Department shall, invariably, condition all developmental/plan releases to the departments to the unconditional vouchsafing by the latter that they shall refrain from making fresh engagements,” he said.

Dr Drabu said it is reassuring to note that a broader political consensus is emerging in Jammu and Kashmir to put in place a viable economic framework, a robust fiscal management structure and an achievable budgetary policy