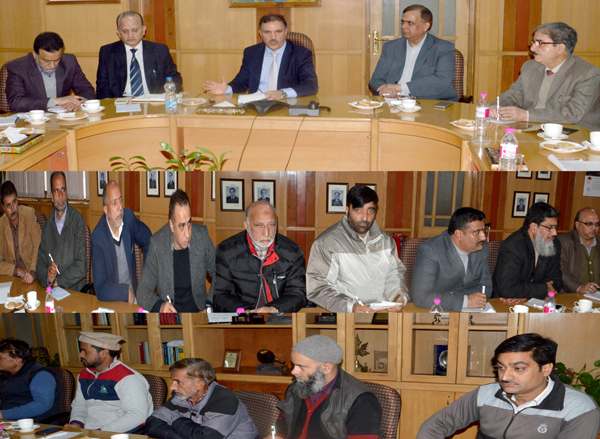 Srinagar, Nov 21: “People of the state along with their trade and economy remain our fundamental strength as a bank and we remain committed to support them and their development in every possible way within the prescribed framework of regulations,” J&K Bank Chairman and CEO Parvez Ahmad

He added,  “Regarding the re-structuring of loan accounts whatever flexibility we are able to get from the system shall be extended to our customers.”

Parvez Ahmed stated this today at a meeting with the delegation of Kashmir Traders and Manufacturers Federation (KTMF) led by its President Mohammad Yasin Khan that called on Chairman here at the bank’s corporate headquarters.

“We are quite aware of our role and responsibilities as the leader bank of this region and are trying our best to meet not only people’s needs but expectations as well. And the best example to support our claim is the way we have smoothly dealt with the central government’s massive-ever demonetisation process across the state when the entire country is still reeling under its effects” Chairman said.

Earlier, President KTMF Mohammad Yasin Khan said, “We are here to congratulate you for assuming the leading role in the financial institution, which is not only Flagship Company of the state but the pride of people as well. J&K Bank remains the backbone of state economy and the leading driver of its growth and development, for which we express our gratitude.”

“We know the entire banking industry is undergoing hard times and J&K Bank too is passing through one of its very difficult times.  However, today we are here particularly to plead for restructuring of our loan accounts as last five months have brought all the businesses in the valley to a grinding halt. Although, we have already taken up the case of loan re-structuring with the state government and are engaged with other stakeholders on the issue. We have requested for the interest waive-off to the relevant authorities also”, he added.

Thereafter, the various office-bearers of the trade body, who had come from across the valley, raised various issues regarding staff shortage at the business units, installation of ATMs at certain places, swelling charges, increase in insurance premiums and the over-all efficiency of the banking procedures.

Chairman Parvez Ahmed responded to each of the issues in detail.

Sounding tough on the issue of customer services, he said, “There will be no compromise on the personal dignity and respect of our customers.”

He further said, “Since we are more focused this time on the issue of re-structuring, recruitment list will be finalised soon. We shall rationalise the staff according to the needs on the ground and a review of charges would also be taken soon. Steps will soon be taken for commissioning of ATMS but only after proper survey of the places mentioned for such installations.”

Regarding the hike in insurance premiums, he said, “Although premiums are related to the risks involved, which have grown considerably after floods and current unrest but we will certainly take up the issue with our insurance partners and press for fairness and better rationalisation.”

“If needed, we can bring in an element of competition in this business for servicing the businesses in the best possible way”, he promised.