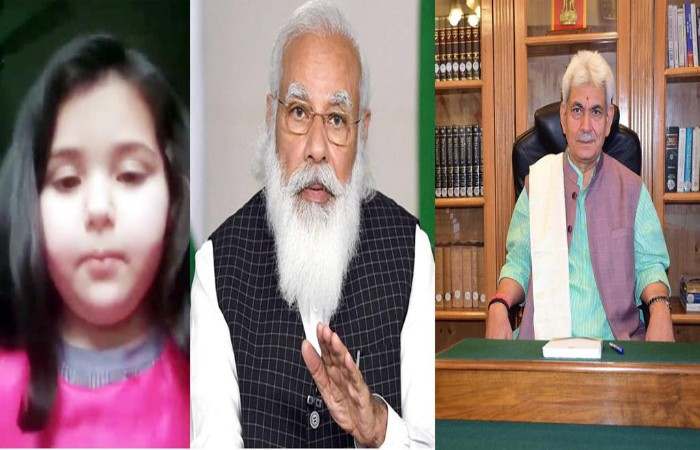 A school girl from Kashmir has spoken for millions of students like hers across the country when she registered her anguish over heavy load of homework and punctuated her litany of complaints with all the innocence, “ why this burden on children?” . But, she knew where the answer lay . She addressed Prime Minister Narendra Modi for redressal of her grievances in her innocent style.

Her appeal was addressed to “ Modi Sahab” Modi by greeting him with typical Islamic way Aslam Walekum depicting her original style and childhood innocence. She was crisp in telling the Prime Minister that she is a six-year-old girl , while narrating her tale of woes about the home work and the plight of the school children . She was talking about her own plight and that of students whom she knew were suffering from the similar fatigue which had snatched the small pleasures of their childhood . The central theme was that all these children have been subjected to zoom classes due to the closure of schools owing to corona virus . She explained 10 a.m. to 2 p.m. phenomenon of torture of zoom classes in quick succession.

The question here is , why did she appeal to Modi ? Is it because he is the Prime Minister or there was some other reason? This question gains importance as it is a Kashmiri child that is seeking redressal of her grievances . It is plain that she made this appeal to Modi because he is Prime Minister, who is thought as be the ultimate to address and resolve problems of one and all.

In the context of Kashmir , it is very interesting and encouraging . This appeal is to the Prime Minister who holds a promise of resolving all the problems. Coming as it did from a Kashmiri child, speaking for many is not political but it is the amount of the understanding that to whom the complaint is to be addressed.

This also is reflective of the psychology of the children who know whom to approach with their grievances, and who can address these. A peep into the current-day Kashmir also bring out the fact that there is a changing mode of home schooling in the Valley , where Modi is now seen as the doer and the deliverer . This change can be appreciated by those who knew that what kind of home schooling and the rhymes the children were made to recite in 2016 when Kashmir was rattled by street protests.

This is a positive change .
And Lieutenant Governor Manoj Sinha has lived up to faith of the children. He, as representative of Delhi in Jammu and Kashmir and head of the Union Territory , took the call with his quick response. to the complaint.

His words were important not only from the position that he holds, wherefrom he directed the education department to come out with a policy to lighten the burden of home work within 48 hours, also the swiftness with which he responded to what he called,” adorable complaint.” This was more than an administrative order. It depicted he has not only taken the words of the girl seriously and admired the way the complaint has been articulated . This is a manifestation of the deep connect that he has established, and wants to boost further from the children to the aged in Kashmir.

Only a genuinely concerned personality who understands and feels the sensitiveness of the situation in which the children are caught in these times can respond in the manner in which he did..
His observation , “Childhood innocence is gift of God and their days should be lively, full of joy and bliss,” says it all.

Perhaps this is the best way to reach out to children who hold the promise of building new future of Kashmir in which they are the biggest stakeholders .

Rocking its own boat in Kashmir PAGD style