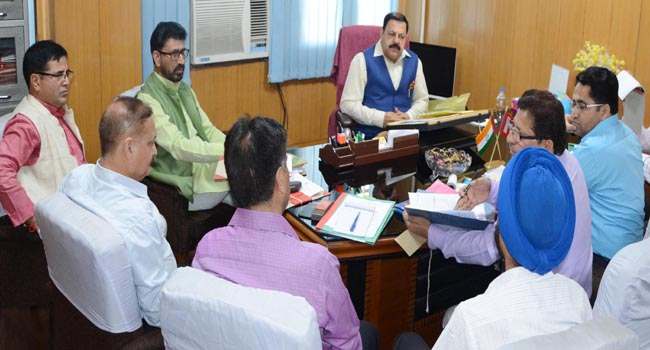 Government will extend Medical Insurance cover to the Kashmiri migrant families living in various townships, camps and colonies in Jammu and outside the state enabling them to have hassle-free access to modern healthcare facilities in their respective areas.

The Minister was chairing a meeting of officers convened to discuss issues of urgent nature relating to Kashmiri migrant families which were brought into his notice during his recent extensive tour to various migrant camps in Jammu.

Nanda said that government will launch a medical insurance scheme for registered migrants of the state, including Kashmiri and Jammu migrants. “The insurance will cover migrants registered under relief and pension category within and outside the state in order to provide hassle-free access to modern healthcare facilities which are beyond the reach of most migrants,” he said adding that the scheme shall provide cover for hospitalization to the insured migrants along with the dependent family members on a floater basis.

While directing the officers for ensuring proper implementation of various initiatives and schemes undertaken for welfare of Kashmiri migrants, the Minister said that the Government would involve the representatives of migrants in formulating various welfare measures so that the migrant families will get optimum benefits from the government schemes. He further said the Government would take all possible steps for the welfare of KP community and for betterment of conditions at their places.

While discussing health care facilities in migrant camps and colonies, the Minister directed the authorities to make available Digital X-Ray facilities at PHC Jagti and Purkhoo for convenience of the migrants. He also directed for keeping sufficient quantity of medicines including life saving drugs in these hospitals. He said one more Ambulance will be provided to the PHC, Jagti, as it is the nodal centre for all migrant camps and will cater to the needs of other camps.

With regard to providing safe drinking water to the migrant camps especially in Purkhoo, the Minister directed the concerned authorities for immediate desilting of the well supplying water to the camp inmates.

The Minister also directed for proper sanitation in the camps for which sufficient funds have been provided under “Swacch Bharat Abhiyan”.  He instructed the concerned to ensure uninterrupted power supply in all the migrant camps so that the people may not face problems during the summer.

Other matters with regard to up gradation and macadamization of roads and inner links, installation of solar systems, opening of Fair Price Shops, construction of more quarters at Veesu- Anantnag, Srinagar, Baramulla and Kupwara, additional quarters at Purkhoo, Pay, HRA and other issues of migrant employees working in Kashmir Valley and automation of Central office of Relief Commissioner, Canal Road, Jammu, have been discussed in the meeting and necessary instructions were issued to the concerned officers on this account.