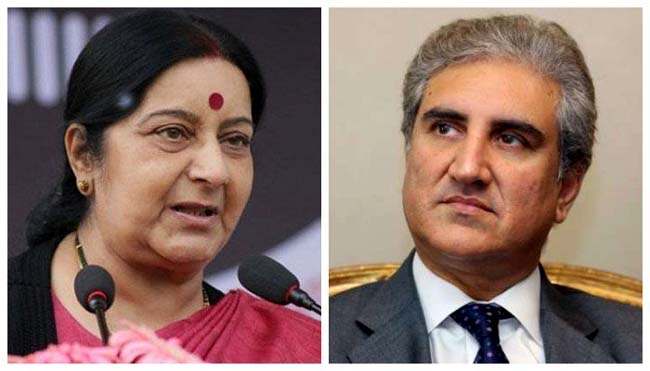 India has called off meeting of  external affairs minister Sushma Swaraj  with her Pakistani counterpart Shah Mehmood Qureshi on the sidelines of the United Nations General Assembly session this month  following the killing of the three SPOs or special police officers in Shopian in Kashmir early this morning.

The announcement of the cancellation was made by the External Affairs Ministry this evening  after reviewing the situation that changed with the two disturbing developments .

While it has referred to the killing of three SPOs and also the release of the postage stamp glamorizing the militant commander Burhan Wani who was killed in  an encounter in South Kashmir in July 2016 , the MEA statement said that  these developments confirmed that “ Pakistan will not mend its ways.”

It said , “ since yesterday’s announcement of a meeting between the Foreign Ministers of India and Pakistan in New York later this month, two deeply disturbing developments have taken place. The latest brutal killings of our security personnel by Pakistan-based entities and the recent release of a series of twenty postage stamps by Pakistan glorifying a terrorist and terrorism confirm that Pakistan will not mend its ways. “

The Hizb-ul-Mujahadeen that  is believed to be behind these killings , is  a Pakistan promoted group. The group had threatened to kill the SPOs if they didn’t  resign from their posts .

The MEA said that “ the decision to agree to Pakistan’s proposal for a meeting between the Foreign Ministers of the two countries in New York later this month was in response to the spirit reflected in the letters from the new Prime Minister and Foreign Minister of Pakistan. The letter from the Prime Minister of Pakistan had spoken of, inter alia bringing a positive change and mutual desire for peace as also readiness to discuss terrorism. “
“Now, it is obvious that behind Pakistan’s proposal for talks to make a fresh beginning, the evil agenda of Pakistan stands exposed and the true face of the new Prime Minister of Pakistan Imran Khan has been revealed to the world in his first few months in office. Any conversation with Pakistan in such an environment would be meaningless. “
In view of the changed situation, there will be no meeting between the Foreign Ministers of India and Pakistan in New York, the MEA  statement said