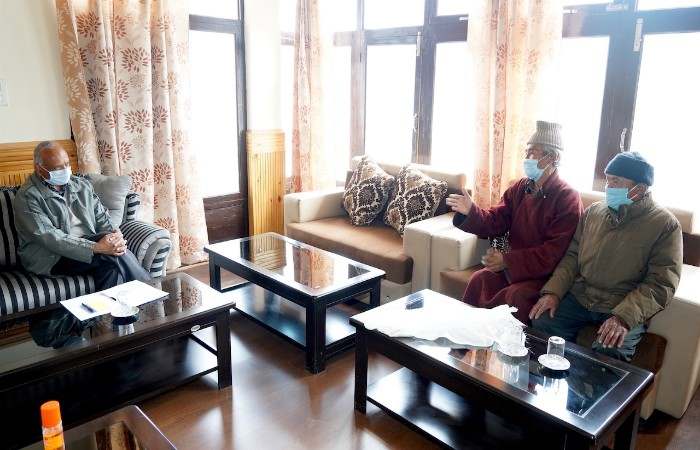 The Lieutenant Governor of Ladakh, R K Mathur on a two-day visit to Sham region, today visited Khaltsi and Lamayuru villages and attended to the various public delegations.

The LG visited Khaltsi market and interacted with the shopkeepers. He also inspected the Khaltsi Degree College and enquired about its functioning.

At Khaltsi, the sub-division headquarter of Sham region, the Lt. Governor was called upon by President LBA, Sham who made a request to set up a PHE Division in Khaltsi on priority to address the issue of water shortage for both drinking and irrigation purposes, to make the Khaltsi Degree College functional with hostel facility, etc.

A delegation led by Nambardar, Nurla in a representation requested the Lt. Governor to consider lift irrigation system at Skintsethang, a community solar dryer and to restore the link road from Nurla bridge to Hallabagh. President Women Alliance Khaltsi made a request to the LG to provide them with funds for the construction of a meeting hall to carryout activities regarding women empowerment and awareness programs.

A delegation of Sham Contractor Association made a submission to re-delegate the financial powers to the Executive Engineers for technical sanction upto Rs. 2 crores. Nawang Rigzin, Sarpanch Khaltsi requested the Lt. Governor to consider fund allocation for completion of construction work of irrigation canal at Patsa-thang and up-gradation of PHC Khaltse to a full-fledged sub district hospital.

Phunchok Angchuk, Sarpanch Tia along with village Nambardar called upon the Lt. Governor and submitted a memorandum requesting to sanction an Airtel mobile tower in Tia and to consider a rehabilitation project for heavy damages due to 2010 flash flood, which is still left unattended.

The Lt. Governor visited Lamayuru monastery and interacted with the community people there. At the monastery, the Head Lama of Lamayuru Drigung Kagyupa Meditation Centre requested to construct a link road from the monastery to the meditation centre. Representing the Lamayuru Cultural Welfare Society, he also put forth the request for financial support to develop tourist facility including a view point for ‘Moon land’ and setting up of a cultural park.

The Lt. Governor heard their issues and said that the issues shall be examined for appropriate decisions.