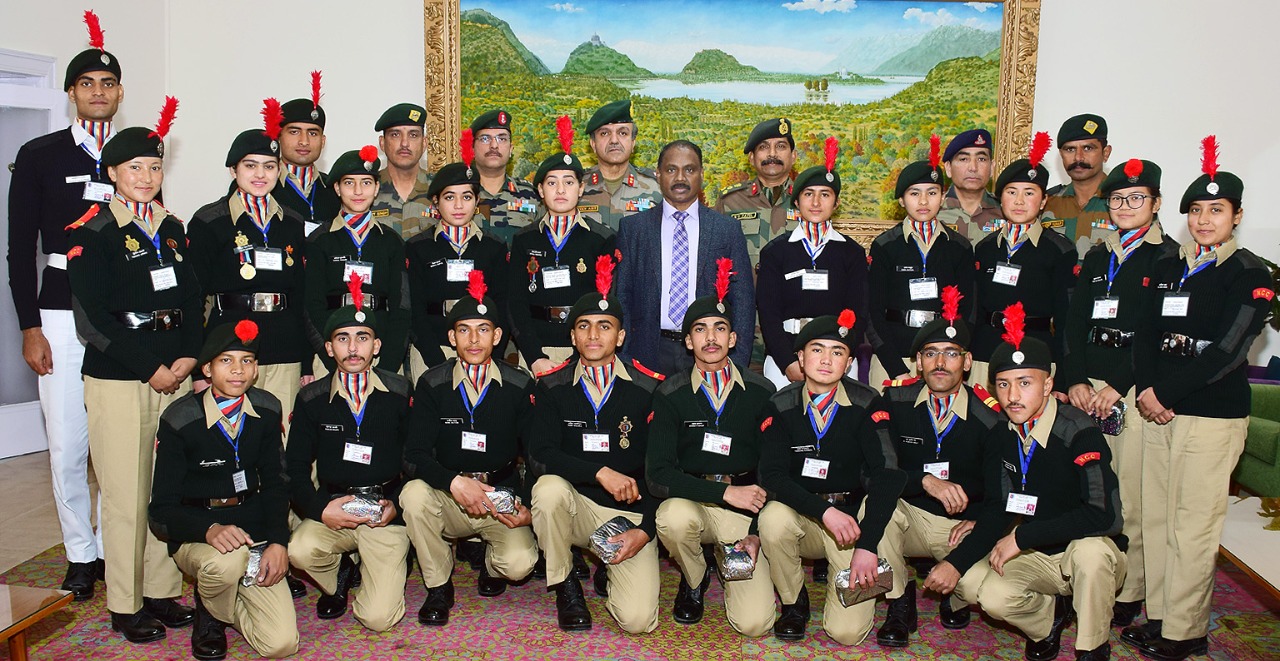 Lieutenant Governor, Girish Chandra Murmu met and interacted with a Republic Day Contingent comprising of 20 NCC cadets representing Jammu & Kashmir and Ladakh, today here at Raj Bhavan.
The Lt Governor termed the National Cadet Corps (NCC) Cadets as the “Ambassadors of peace and tranquility in the Union Territories.” He said that the Motto of NCC-‘Unity and Discipline’ has a great role in Nation Building.
The NCC group was led by Major General Naveen Kumar Airy, Additional Director General, NCC Directorate, Jammu Kashmir, and Ladakh; accompanied by Brigadier RG Patil, Group Commander, NCC Group Srinagar, Col Pankaj Atrri, Contingent Commander, Lt Col Amit Datta, Liaison Officer, Lt Col BS Taragi, Training Officer and Sub Jagjeet Singh, Contingent JCO.
The Lt Governor complimented the Cadets for their selection and wished the Contingent high success in the various competitions in which it would be participating at the forthcoming Republic Day Camp.
“It is a matter of pride to march on the Raj path and also to meet the Prime Minister and other dignitaries at New Delhi” the Lt. Governor remarked. He advised the Cadets to make the most of this great opportunity to interact with the cadets from across the country and project a progressive and positive image of the Union Territories, and showcase their rich culture and traditions in a befitting manner. He hoped that this group of cadets from Jammu & Kashmir and Ladakh would bring laurels for the Union Territories.
On the occasion, Major General Airy highlighted the achievements and activities undertaken by NCC Directorate Jammu & Kashmir and Ladakh of the cadets during the year 2019.He further apprised the Lt Governor about the selection of 6 NCC Cadets as officer in Indian Army and joining of 81 Cadets of J&K in Armed Forces in other Ranks.
The Lt Governor lauded Major General Airy on the performance report of J&K’s NCC cadets at various national level events and selection of a sizeable number of cadets to the Armed Forces. He stressed the need for all required efforts being made to enable the maximum number of youth from Jammu and Kashmir to join the excellent organization like NCC which inculcates discipline and the spirit of camaraderie and resilience.
The interaction concluded with the Lt Governor partaking in the high tea and group pictures with the cadets and Army officers leading the contingent.