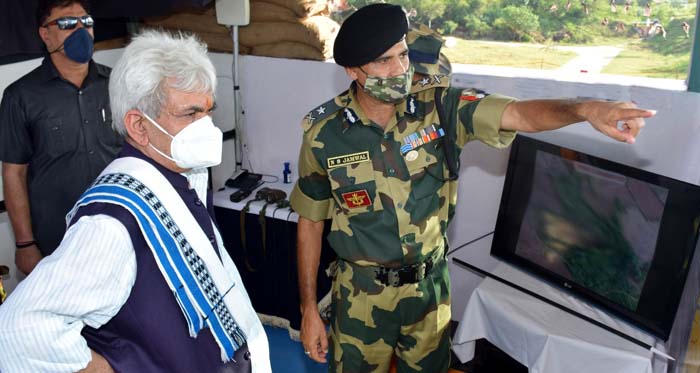 Lieutenant Governor, Manoj Sinha today visited Border Outpost of BSF in Hiranagar Sector, where he was briefed by the IG BSF, NS Jamwal about the security preparedness and steps taken to strengthen the security along the International Border (IB).
The Lt Governor also observed IB from BOP, Bobiya.
Later, the Lt Governor visited Border Village Bobiya of Hiranagar area and took stock of the issues of the residents of Border Villages.
The local residents of Bobiya and other Border Villages apprised the Lt Governor about their concerning issues and sought his intervention for their early redressal. They requested him to review the distance fixed for Border area reservation and demanded for rationalization of the same. They also raised the issue of cultivation of land beyond the fencing.
The Lt Governor gave a patient hearing to the issues of the border residents and assured them that all their genuine concerns and demands would be taken up for consideration. He asked them to cultivate their land beyond fencing and further assured them that the Government will extend all possible assistance to the farmers for extracting optimum benefits out of the land beyond fencing.
The Lt Governor asked the BSF to cooperate with the locals in resolving their issues and also passed onspot directions to the concerned officers of Civil Administration for resolving the crucial issues of border residents.
The Lt Governor was accompanied by Sh. Hirdesh Kumar, Commissioner/Secretary to the Government, Transport Department; Sh. Sanjeev Verma, Divisional Commissioner, Jammu; Sh. Mukesh Singh, IGP Jammu; Sh. NS Jamwal, IG BSF; Sh. O.P. Bhagat , Deputy Commissioner, Kathua and other senior officers.