Mehbooba asks PM to open dialogue with Hurriyat, others 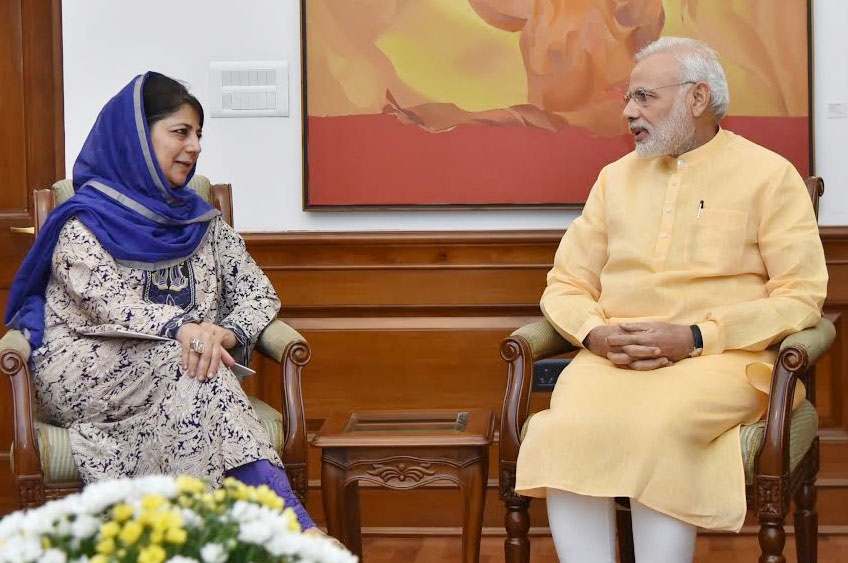 Jammu and Kashmir  Chief Minister Mehbooba Mufti  has told Prime Minister  Narendra Modi to  seize the opportunity  and open dialogue with Hurriyat Conference and other stake holders  in Kashmir .

Mehbooba  angled for direct intervention of Prime Minister , who, she said, had been  vastly mandated by the people  to resolve all issues, and Kashmir is one of them.

The  Chief Minister  based her arguments against the backdrop of the deteriorated law and order situation  and  escalating tensions on borders, resulting in migration of border population.

This transpired during   nearly an hour-long meeting  Chief Minister  had with Modi   here this afternoon .

Mehbooba urged the Prime Minister to “ reach out to the people of Jammu and Kashmir with tangible confidence building measures to address their political, economic and developmental concerns.,”   said an official handout , released after the meeting .

“ The people in Kashmir have gone through enormous agony and pain and the time has come to reach out to them and apply a balm to their wounds through ample initiatives at political, economic and developmental levels,” the Chief Minister told the Prime Minister.

Mehbooba said, she urged the Prime Minister “to view the current situation in the state as an opportunity and start a dialogue process with the people of Jammu and Kashmir.”

“I hope that the Prime Minister, who has received such a big mandate, takes this situation as an opportunity and reaches out to the people of Jammu and Kashmir by starting a productive dialogue process to end the miseries of the people in the State,” she said.

While expressing grave concern over the prevailing situation along the borders,  Mehbooba called for de-escalation of the tension as, according to her, people in Jammu and Kashmir have been the worst sufferers of the hostility and confrontation in the region.

“Today also hundreds of families have to migrate from the border areas of the State and they suffer immense hardships because of the prevailing tense situation in the region,” she said and stressed the need for reviving the peace and reconciliation process in the region.