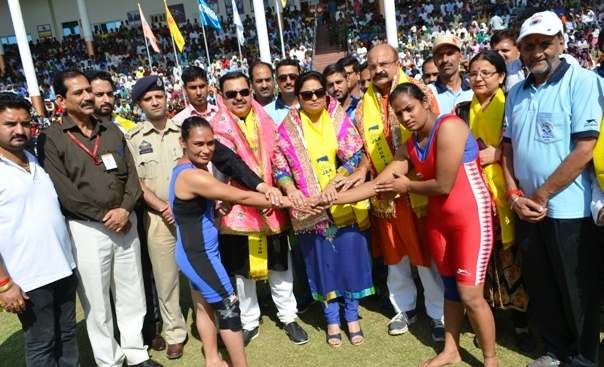 Stressing the need for providing ample opportunities and conducive environment to the girls, Minister of State for Education, Technical Education, Culture, Tourism, Horticulture, Floriculture and Parks Priya Sethi said that they have the talent and capabilities which need to be nurtured so that they outshine and create a niche for themselves in the field of their choice.

“Women empowerment is pre-requisite for societal progress and prosperity for which the present government is determined”, maintained the Minster.

The Minister was speaking at the women wrestling competition during the 12th Mission Dosti, Rustam-e-International Indian Style Dangal held as a part of the Navratra festival at Katra.

While appreciating the women wrestlers, Priya said that girls are showing their abilities in every field and bringing laurels for their family and country .

Reiterating the commitment of the government at the centre and state towards women empowerment, the Minister said that various women centric schemes being implemented in the country are ensuring socio economic emancipation of the women folk who are equal stakeholders in progress and development of the nation.

Stressing on ‘Beti Bachao, Beti padhao and Beti khelao, Ms Sethi said that Women are excelling in every field, be it the education or sports’.

She further said that the present Government is committed to promote tourism in the state and concerted efforts are on in this direction to develop requisite infrastructure to optimally tap the tourism potential of all the regions.

Stating that Katra has a wide potential in religious tourism, she added that many new tourist ventures have been explored and developed for attracting more and more tourists at various tourist destinations at Reasi district. She further added that with an aim to promote and popularise the Navratra festival on a larger platform this year budget was enhanced from Rs thirty lakh to fifty lakh. She also exhorted upon the participating wrestlers from various countries to act as an ambassador for the state to dispel any misconception regarding the atmosphere in Jammu and Kashmir. She added that the government has put in place a strong mechanism to ensure a favorable environment in the state for the visitors who throng our state to enjoy the scenic splendour besides satiating their spiritual aspirations.

Speaking on the occasion, the Chief Guest, Minister of State for Finance and planning, Ajay Nanda announced Rs. 75000 for all the women wrestlers who had participated in the wrestling competition.

A total of 41 bouts for both men and women were organised.