Modi takes second dose of Covaxin at AIIMS, says ‘get your shot soon’ 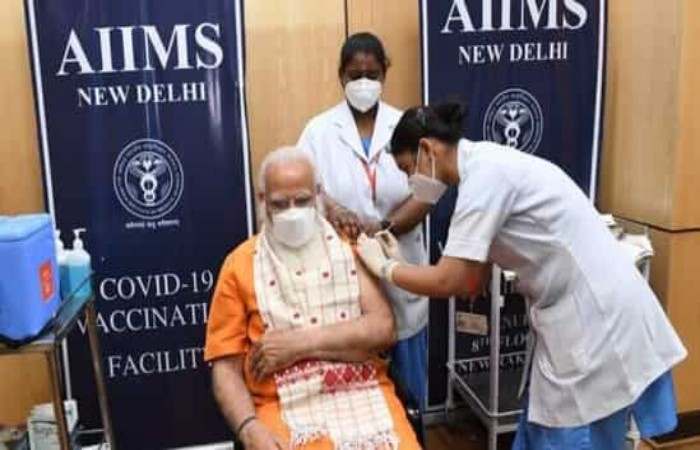 Prime Minister Narendra Modi on Thursday took the second dose ofBharat Biotech’s Covaxin at AIIMS and once again urged everyone to get inoculated as vaccination is “among the few ways to defeat the virus”. “If you are eligible for the vaccine, get your shot soon,” PM Modi tweeted after getting inoculated urging people to get registered on cowin.gov.in for vaccination.

On March 1, when India’s vaccination drive was opened to senior citizens and people with comorbidities above the age of 45, PM Modi received the first dose of his vaccine. Puducherry’s Sister P Niveda administered him the first dose. “Took my first dose of the COVID-19 vaccine at AIIMS. Remarkable how our doctors and scientists have worked in quick time to strengthen the global fight against COVID-19. I appeal to all those who are eligible to take the vaccine. Together, let us make India COVID-19 free!” he tweeted after receiving the first shot.

As India is stepping up its battle against the second wave of the pandemic, which has hit the country hard with number of daily infections rising over 1 lakh, the vaccination drive is now open to everyone above the age of 45 years.

So far, India has administered 8.83 crore vaccine doses, till Wednesday 8pm, including healthcare workers, frontline workers and people above the age of 45 years — with and without morbidities.

The Centre has also allowed vaccination of the priority groups at work places — both government and private, which will start from April 11.

On Thursday, PM Modi will interact with the chief ministers of states and Union territories to review the pandemic situation and the vaccination progress of the country, as several states are bringing back strict restriction to contain the spread of the infections.