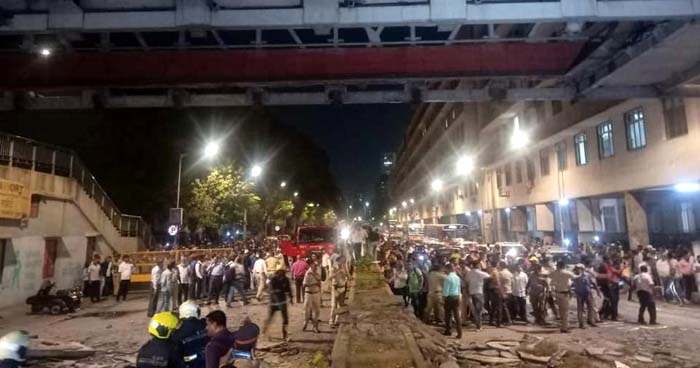 Rescue operations are under way.

Five persons were killed and 34 were injured after a section of a foot overbridge outside Mumbai’s Chhatrapati Shivaji Terminus collapsed on Thursday evening, PTI reported. The injured have been taken to hospital, officials said.

Rescue operations are under way. According to Mumbai Mirror, many are feared trapped under the debris.

The foot overbridge connects the Chhatrapati Shivaji Terminus with the Azad Maidan police station. It is also called “Kasab bridge” as Ajmal Kasab, one of the terrorists who struck Mumbai in November 2008, had used it during the attacks. The bridge, which is three decades old, is also close to the office of the Brihanmumbai Municipal Corporation.

Traffic in the area has been affected after the incident. Senior police officers are on the spot, the Mumbai Police said on Twitter.

The incident took place around 7.30 pm when a major portion of the overbridge caved in, an official told PTI. Some motorists who were passing beneath the bridge were among those injured, the official said.

Maharashtra Chief Minister Devendra Fadnavis tweeted that he was pained to hear about the incident.

“Spoke to BMC Commissioner and Mumbai Police officials and instructed to ensure speedy relief efforts in coordination with Railway Ministry officials,” he said.

In September 2017, a stampede on a foot overbridge between Elphinstone Road and Parel railway stations in the city had killed at least 23 people.