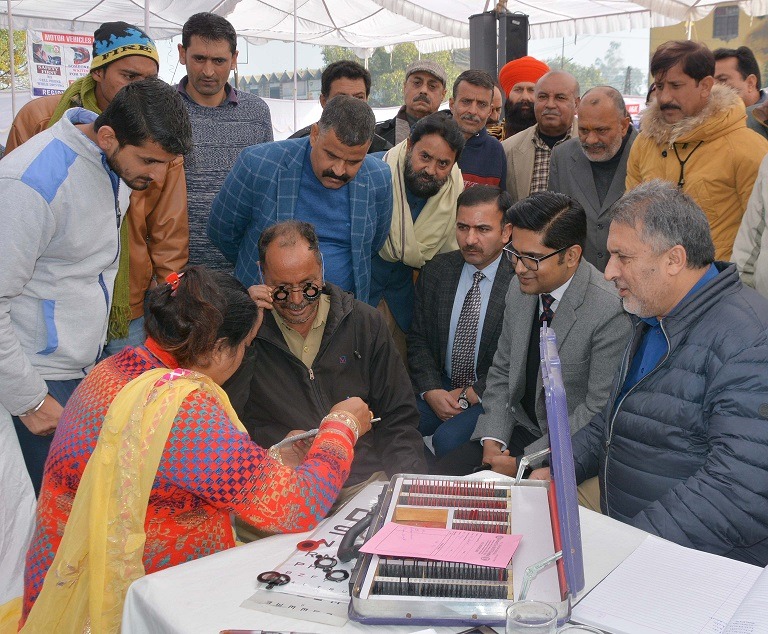 Regional Transport Office, Jammu, in collaboration with Health Department, Jammu and Rotary Eye Hospital, Udhampur, today organised one day free Medical-cum-Awareness camp for Drivers of passenger vehicles, here at Ware House.
The camp was inaugurated by Principal Secretary, Transport Department, Dr Asgar Hassan Samoon, in presence of Transport Commissioner, J&K, Dr Owais Ahmed.
A large number of drivers, helpers and Transporters participated in the camp.
Medical check-up including Eye, Sugar, BP tests of about 300 drivers was conducted by a team of Doctors and para-medical staff of the Health Department, Jammu and Rotary Eye Hospital, Udhampur.
Dr Samoon, who was the chief guest on the occasion, impressed upon the Motor Vehicles Department, Transporters and Drivers to ensure safety of road users and ensure implementation of Motor Vehicles Act and Rules, strictly.
Dr Samoon asked the RTO Jammu to constitute Flying Squads for conducting regular checking on different routes to keep check on traffic violations for minimising road accidents. He lauded the role of Motor Vehicles Department for organising the Medical-cum-Awareness camps across the division and advised it to conduct such programmes regularly.
He stated that Department has introduced E-buses in Jammu and Srinagar cities and plans to further strengthen public transport in hilly areas so as to reduce accidents and traffic congestion. He advised transporters to avail benefits of Transport Subsidy Scheme launched by the Department providing Rs 5 lakh per bus to phase out 15 year old buses in twin capital cities.
Dr. Owais Ahmed, Transport Commissioner, J&K, expressed concern over the increasing incidents of road accidents, especially in hilly areas and stressed upon all stakeholders, including drivers to follow Traffic Rules for safe driving on the roads. He cautioned drivers not to mix drinking and driving and desist from over-speeding. He stated that construction of Institute of Driving, Training and Research (IDTR), Jammu and Inspection certification Centre (ICC), Samba is expected to be completed by March 2020, whereat Drivers training and automatic/mechanical fitness of vehicles shall be conducted for reducing accidents and ensuring safety of road users.
Earlier, RTO Jammu, Dhananter Singh said that Motor Vehicles Department, Jammu has continuously conducted such Medical-cum-Awareness camps at Jammu and in other districts for the benefit of drivers and to ensure safety of road users. He informed that a roster has been formulated in consultation with ARTOs for organising such Medical-cum-Awareness camps in all districts of Jammu division starting from December 16, 2019 to January 2, 2020.
He stated that the main purpose of organising such camps is to ensure physical and mental fitness of drivers for ensuring safe driving on roads. He also gave awareness about recent amendments made in Motor Vehicles Act, 1988, effective from September 1, 2019. Pertinently, in the recent amendments, fines and penalties for different violations of Motor Vehicle Act and Rules have been revised. He advised the people to follow the traffic rules to avoid accidents for ensuring safety of road users/commuters.
ARTO (HQ), Jammu Shammi Kumar, presented vote of thanks and thanked the health department Jammu, Rotary Eye Hospital Udhampur guests, media persons, and other participants for attending the awareness camp.
Among others, ARTO, BOI-P, Mohammad Salim; ARTO, BOI-G, Rajesh Gupta; ARTO, Jammu, Pawan Sharma were also present in the camp, besides, General Secretary, all Transport Groups and Presidents of Jammu, Kathua, R S Pura, Chhamb, Buses Groups and Presidents, 2×2 Buses, Mini Buses, Taxi Union were also present on the occasion.