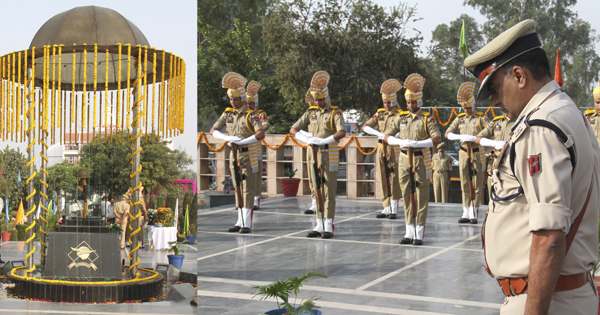 The main function was conducted at Gulshan Ground Jammu where Dy. Chief Minister , J&K, Sh. Nirmal Kumar Singh was Chief Guest and  Shri Danish Rana  , IPS, IGP Jammu Zone took the salute of the Commemoration Day Parade.  GOs of all Jammu based Units were present, apart from a large number of senior / retired Police Officers and prominent Citizens of Jammu.

While speaking on the occasion, Dy. Chief Minister Shri Nirmal  Kumar Singh paid rich tributes to  all those Martyrs who laid down their lives for Unity and Integrity of our nation in different parts of the Country  while lauding the role of brave martyrs he said J&K Police has been rendering yeoman service to the Nation and the society under most hostile, difficulty  and hazardous circumstances at the cost of their personal comforts and family .

Let us pray for the heavenly peace of these brave souls and for the prosperity and betterment of their families.

While speaking on the occasion Shri Danish Rana , IGP Jammu Zone paid rich tributes to  all those Martyrs who laid down their lives for Unity and Integrity of our nation in different parts of the Country. The names of the  Martyrs from all Police Organizations and PMF like BSF, CRPF, ITBP, CISF, SSB, NSG were  read out.  He said that the journey to Hot springs in Ladakh is a pilgrimage for every policeman in the country. For Dy.SP Karam Singh and his twenty dedicated compatriots of CRPF patrolling the Indian Territory at the Hot Springs in Ladakh at a souring height of 4,681 meters above the sea level, while guarding the integrity and territory of motherland, 10 gallant CRPF personnel laid down their precious lives while repulsing the Chinese attack at Hot Springs, Ladakh on 21st October, 1959. To pay homage to these Martyrs, 21stOctober is commemorated as Martyr’s Day by the Police all over the India.

He read out the list of 473 brave Martyrs of the Country and paid rich tributes to them followed by laying of wreaths at Martyrs Memorial followed by Officers from all Units along with senior / retired Police Officers, prominent Citizens and members of Martyrs’ families.

Later, IGP Jammu Zone interacted with NOK of martyrs. He paid a patient hearing to the grievances of NOKs of Martyrs and assured full support and timely action on the requests submitted by them.

Earlier all the Jammu based GOs assembled at Police Martyrs Memorial at Railway Station at 0900 AM and paid rich tribute to Martyrs who laid down their lives for Unity and Integrity of our nation in different parts of the Country.

Prominent among them were IGP IR, Jammu Zone, DIG Jammu, all COs and Officers from Armed Police Units, SSP Jammu and all Officers of Jammu district, and retired Police Officers were present in the function.

A blood donation camp was also organized after the Commemoration Day Parade in which all senior Officers and other volunteers including the Jammu team donated the blood.

Moreover, an impressive function was conducted again in the evening at Police Martyrs Memorial Railway Station, Jammu where a large number of Police /Civil families assembled to light candles and paid rich tributes to the Martyrs of the nation.