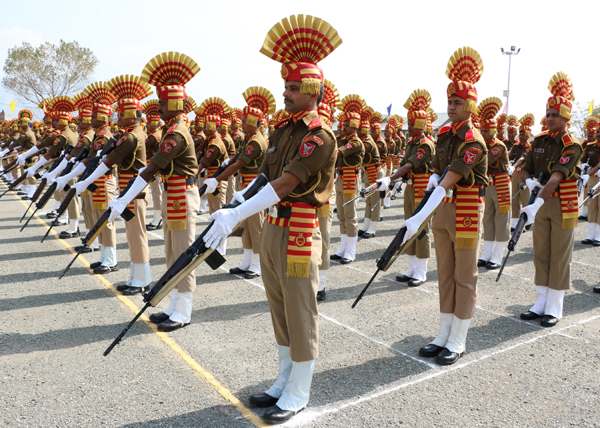 Police commemoration day was observed in all districts of the valley today. Parades were conducted and tributes were paid to the martyrs of departed souls who sacrificed their precious lives for upholding,  safeguarding integrity and sovereignty of the nation. The families of the martyrs and police officers were present on the occasion.

DIG SKR Shri Ghulam Hassan Bhat, lauded the courage shown by the J&K Police personnel in protecting the life and properties of the public. He said that the situation in the state was volatile and credit goes to J&K Police for bringing the situation to normalcy. SSP Anantnag Shri Zubair Ahmad Khan read over the names of all  Police personnel who scarified their lives in the line of duty across the state.

In Pulwama the commemoration day was observed at district police lines Pulwama. SSP Pulwama Shri Rayees Mohammad Bhat read out all the names of Martyrs who sacrificed their lives. Cheques of rupees ten thousand were presented to the next of kins of police martyrs. Later the families of the martyrs were served with a tea party. During the occasion some issues were raised by the families which were put forth before the concerned authorities for early redressal.

In Kulgam the commemoration day was observed at district police lines Kulgam. The contingent of police paid homage to the martyrs. Among the participants Dy Commissioner Kulgam Shri Showkat Aijaz, Addl DC, CMO, CO 18th Bn CrPF and senior civil and police officers witnessed the commemoration parade. SP Kulgam Shri Shridhar Patil readout the sacrifices of martyrs and paid glorious tribute to the martyrs. A free medical camp was also established for the families of martyrs.

The police personnel of the district also donated blood in memory of the martyrs to District Hospital Kulgam. The next of kins of martyrs were hosted with a tea party and were heard in length by the SSP to redress their grievances. Moreover, the nodal officer as well as other police officers were directed on spot for every possible assistances to the martyr families.

In Kargil the commemoration day was observed at district police lines Kargil to recall the sacrifices made by the brave police personnel. SP Kargil Shri Rahul Malik readout the names of all martyrs who laid down their lives on duty for the unity and integrity of the nation. On the occasion Chief Executive Councilor LAHDC Kargil Shri Kacho Ahmad Ali Khan, Dy. Commissioner Kargil Shri Gulzar Hussain, Addl SP Kargil and other police officers and senior citizens were present on the occasion.