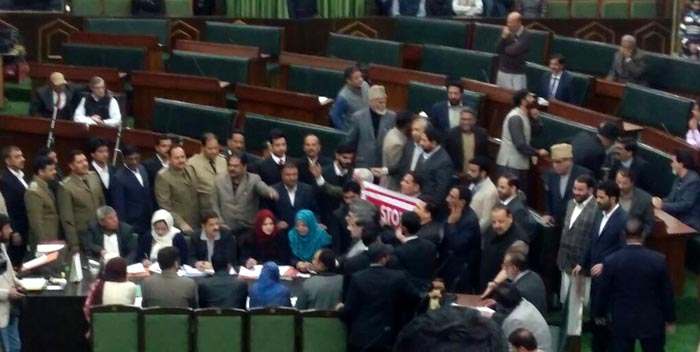 Main opposition MLAs including National Conference and Congress today walk-out from the assembly during question hour demanding reply from the State Government over the issue of civilian killings in Kashmir and cane-charge on NHW workers at Jammu.

The opposition disrupted the Question Hour since the beginning of the House proceedings on Wednesday and demanded reply from the state government on a civilian killing in Shalibagh constituency of NC MLA Abdul Majeed Larmi.

Speaker Kavinder Gupta not allowed the discussion and then the entire opposition members staged walkout of the Jammu and Kashmir Legislative Assembly over civilian killings and lathi-charge on NHM employees. Shouting anti-government slogans, the members entered into the well of the House.

Saying that civilians are being killed in Kashmir and employees are being lathi-charged in Jammu, the House witnessed noisy scenes as the members created ruckus and disrupted the Question Hour for over 20 minutes.