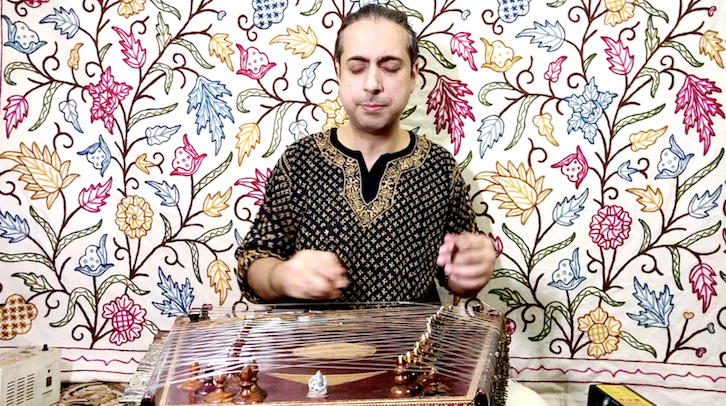 Internationally acclaimed Santoor Maestro & Music Composer Abhay Rustum Sopori has composed a new raga named as Raga Sharda, which he performed on Santoor and introduced in the inaugural function of Sharda Festival. The festival has been conceived by well-known writer Dr. Agnishekhar and presented by RMK Arts and Research Foundation held online.

Maestro Sopori is hailed as the cultural icon of Jammu & Kashmir and represents the fabled Sopori – Sufiana Gharana of Kashmir, the exclusive traditional Santoor family of India with its Shaivite – Sufi roots spanning over more than 300 years. He has the credit for creating a Cultural Revolution in Jammu and Kashmir bringing the youth together through music. He has been instrumental in introducing ‘Cultural Policy’ in Jammu & Kashmir and also introducing music as a formal subject in schools & colleges. He has been honoured with a number of awards for his contribution to music which include the prestigious ‘Mahatma Gandhi Seva Medal’ – Gandhi Global Peace Award by United Nations accredited Gandhi Global Family, 2020, ‘Top Grade Artist’ by All India Radio, Govt. of India, 2019, ‘Atal Shikhar Samman’, 2017 presented at the Parliament of India, ‘Dr. S. Radhakrishnan National Award’, 2017, ‘State Icon’ title by Election Commission of India, Jammu & Kashmir, 2016, ‘J&K Government Civil Award’ 2011, etc. He has also composed and introduced Raga Nirmalkaunce and Raga MahaKali, which have been widely acclaimed by the music connoisseurs and critics.

Raga Sharda is a new addition to the treasure of ragas in Indian classical music. Abhay has placed the raga as an evening raga in Purvi Thaat with Shadav-Shadav combination of notes. He commenced his recital with an introduction to the raga and then performed a brief Aalap in the ‘Sopori Baaj, the style of Music Legend Pandit Bhajan Sopori with Meend, Glides, Gamak, etc. and a composition in Teentaal. Abhay also presented his self composed Bandish in this raga “Hey Sharda Ma Namastutey, Kashmirpur Vasini, Shatatantri Veena Vadini”. The raga was enjoyed by thousands of viewers online.