No compensatiom to youth tied as humam shield: State Govt 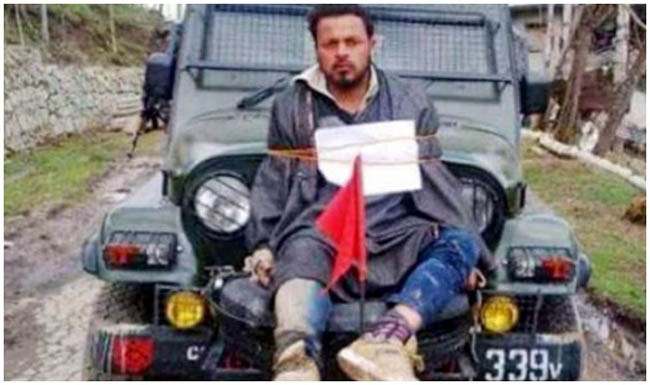 Jk News Today
Jammu, Feb 01:
State government today given reasons for no compensation as recommended by the State Human Rights Commission to a Kashmiri youth who was tied to bonnet of an army vehicle as human shield in April 2017.

In a written reply to a question of NC MLA Ali Mohammad Sagar, Chief Minister Mehbooba Mufti said no allegations with regard to youth tied with army bonet have been levelled against the state government or any of its functionaries.

“On 13-04-2017, police station Beerwah received an information through reliable sources that a video/audio was uploaded (on social media) displayed on news channels depicting therein that on 08-04-2017 (polling day) one person, Farooq Ahmad Dar of Chill Khansahib was tied with ropes on the bonnet of an army Vehicle, followed by a Casper under threat, keeping him under wrongful confinement and making him a human shield etc. Consequently, a case FIR no. 38/2017 u/s 342,367, 506 RPC was registered in police station Beerwah and investigation was taken up. The investigations yet to be concluded,” said Chief Minister.

SHRC had recommended an amount of Rs.10 lakhs as compensation in favour of Farooq Dar.

That no allegations as regards violation of human rights of the applicant have been leveled against the State Government or any of its functionary The State Government has discharged its obligation by registering an FIR No. 38/2017 in the matter at P/S Beerwah and consequently, initiating the investigation.

The CM added pending completion of the investigation in the matter, the recommendation with regard to payment of compensation to the complainant, shall tantamount to establish the guilt of the accused without affording him an opportunity of being heard.