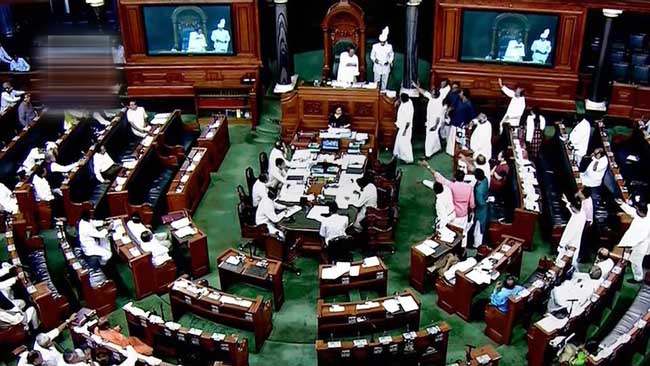 Top leaders of the two parties, including Congress President Rahul Gandhi, will take part in the debate which will conclude with a reply from Prime Minister Narendra Modi

Jayadev Galla, a first-time MP of the Telugu Desam Party, this morning moved in the Lok Sabha, a no-confidence motion against the Narendra Modi government, kick-starting a debate that will end in a vote this evening. Minutes before he began, the Biju Janata Dal walked out of the lower house of Parliament, stating that today’s discussion is irrelevant for Odisha, the state it rules.

The BJP’s oldest ally and the most disgruntled, the Shiv Sena has meanwhile said it will boycott the proceedings, with its MP Anandrao Adsul telling news agency ANI, “Absolutely not. We haven’t even signed our attendance,” when asked if the party will debate and vote.

While the move allows the Shiv Sena to again record its sulk with the BJP, its decision and that of the BJD to walk out will help the government. Everyone agrees that Prime Minister Narendra Modi has the numbers, but in an intense battle of optics, as the BJP-led government wants to demonstrate brute strength by defeating the no-confidence motion by two-thirds of the vote.

The AIADMK and Telangana’s TRS together have 48 MPs and the BJP hopes they will vote against the motion or at least abstain, helping bring its target down further. Both parties have said they will not support the TDP motion, but not much more.

Two members of West Bengal Chief Minister Mamata Banerjee’s Trinamool Congress, a key opposition party, are not in Parliament – they are busy organizing a mega party rally to be held in Bengal on July 21. The Trinamool has 34 MPs.

The opposition, led by the Congress, too has reached out to parties seen as sitting on the fence in equally rigorous efforts to make it a lesser win for the government. Till hours before the debate, both sides were attempting to win over parties seen as sitting on the fence. Senior BJP leaders told Hindustan Times that the idea is to show that the ruling National Democratic Alliance that their party leads enjoys support across political boundaries.

The current strength of the Lok Sabha is 533 members, excluding the Speaker; 267 votes would defeat the motion and the two-thirds mark is at 355, if all MPs vote. All that changes with the BJD and Sena not voting, as the strength of the house will be lowered and so will be BJP’s target. The BJP has 273 members and the NDA 312 in total, including the Shiv Sena.

The TDP was a BJP ally till earlier this year, but broke ties over the centre not accepting its demand for special status to Andhra Pradesh, the state the party rules. In his speech today, Jayadev Galla called the Modi government “a saga of unkept promises.”

Ahead of the motion being moved, opposition leaders, meanwhile, protested against time limits imposed on speeches by Speaker Sumitra Mahajan, who has said that the vote will be held at 6 pm. She also underscored that there will be no lunch break for the MPs.

Early this morning, hours before his government faced its first no-confidence motion, Prime Minister Modi urged members of Parliament to ensure a constructive and disruption-free debate.

“Today is an important day in our Parliamentary democracy. I am sure my fellow MP colleagues will rise to the occasion and ensure a constructive, comprehensive & disruption free debate. We owe this to the people & the makers of our Constitution. India will be watching us closely,” tweeted the Prime Minister. Just before Parliament convened for the day, PM Modi held a meeting with senior BJP leaders including party chief Amit Shah and union home minister Rajnath Singh, news agency ANI reported.

Today’s debate will feature speeches by Congress president Rahul Gandhi, Home Minister Rajnath Singh and will end with a reply by the Prime Minister.