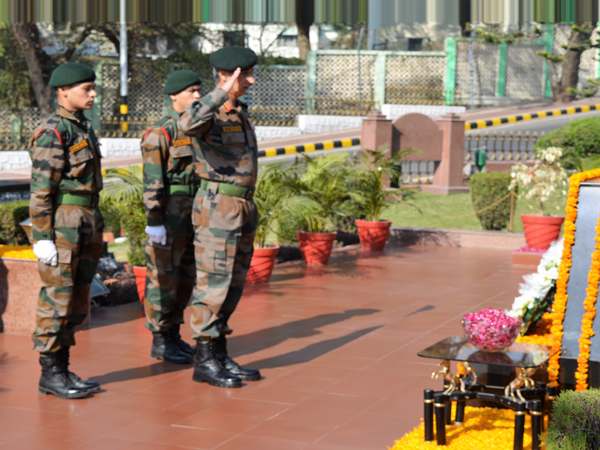 The Northern Command today bid adieu to their  GOC-in-C, Lt Gen DS Hooda, who is proceeding on retirement after an illustrious career of 40 years. The General had taken over command of the prestigious Northern Command on 01 July 2014.

In his farewell address, the General paid rich tributes to the martyr’s who have laid down their lives in the service of the nation and exhorted all ranks to continue to work with the same zeal and motivation to overcome the numerous challenges of combating terrorism, unabated proxy war and external threats.  The Army Commander stressed upon the concept of “Unlimited Liability” associated with the profession of Arms and the subtle difference of military profession from others.

He further emphasised the need to strengthen military ethos and stressed upon the increased responsibility that officers have towards the men they command. He appreciated efforts of all ranks for their immense professionalism and dedication in carrying out their tasks in trying conditions at the LC/LAC and in counter terrorists operations. He highlighted the immense contribution, cooperation and jointness with the IAF while carrying out various operations in the command theatre.

He also complimented and thanked the civil administration & CAPF for the excellent synergy with the Army in pursuit of common goal of establishing “Peace & Tranquility in the state of J&K. The General officer laid a wreath at the Dhruva War Memorial to pay his tributes to the brave martyrs of Northern Command.

As he hangs his uniform, the future generations of army officers will strive to emulate him as a military leader owing to his sterling qualities, his firm resolve to follow the righteous path under all circumstances, his sense of justice and his statesman like qualities in dealing with contentious issues.  All officers, JCOs and men in Northern Command and the entire Indian Army will remember him fondly as they say goodbye to the illustrious intellectual General Officer.