Not war but peace 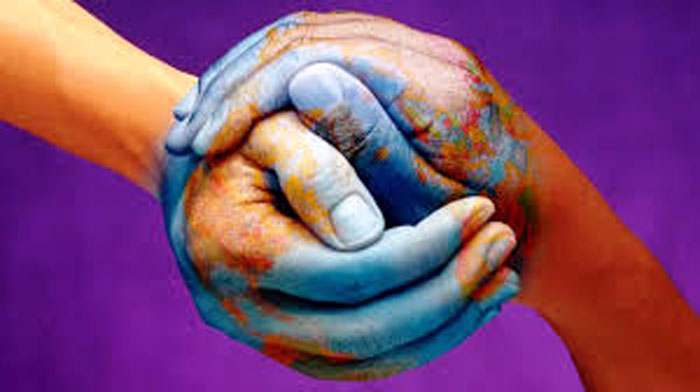 India’s surgical strike in PoK seem to have the nation overjoyed. There were congratulatory messages all over Twitter, ‘Proud to be Indian’ posts all over Facebook and a section of the media celebrating India’s military response to the Uri attacks. But isthere any reason to celebrate? We have crossed the line of control, surgically struck and have inflicted heavy casualties on terrorists. Pakistan’s defence minister has said they are open to using tactical devices(reference to tactical nuclear weapons) if he feels the nation’s safety is threatened. Is this a reason to celebrate? To one’sknowledge no two nuclear powers have fought a conventional war. Efforts to cross the LoC or the international border, can potentially result in a war between the two nations. Is that a reason to celebrate?

If India and Pakistan fought a war, detonating 100 nuclear warheads (around half of their combined arsenal), each equivalent to a Hiroshima bomb, would lead to the loss of more than 21 million lives, about half the world’s protective ozone layer would be destroyed, and a “nuclear winter” would cripple the monsoons and agriculture globally.The costs would be higher and not just in India and Pakistan, where the 21 million peoplewould perish within a week but another two billion people worldwide would face risks of starvation.

If it doesn’t escalate to nuclear warfare and the countries decide to go the conventional way, Estimates suggest the Kargil War cost India 10,000 crore. Compared to the Kargil war in 1999, that cost approximately 5,000 crore a week then, a war with Pakistan now will cost 5,000 crore per day.Even if the war lasts for 50 days, it would cost India at least 2,50,000 crores.An Indo-Pak war can raise India’s fiscal deficit by 50 percent to about 8 lakh crore.The war will give a severe blow to the inward investment and can bring down the value of rupee to 100 to the US dollar.

One of our sittingMP said, that if 100 million Indians died in a Pakistani nuclear attack, India’s retaliation would wipe out Pakistan. For the MP, 100 million may just be a number. But that numbercould be‘you’ and ‘me’. Are we willing to pay the price?

Sitting in their bungalows in Lutyens Delhi and their palatial apartments overlooking marine drive in Mumbai it is very easy to celebrate India’s strikes. The bombs and missiles are not going to be flying over their heads but they will be flying over ours in Jammu and Kashmir. It is easy to demand India to be strong, and have a hard stance. But before they ask, we must put all those demanding strong stances and hard responsesout of their their Burma teak and glass cocoons and let them see the tanks go by, watch the helicopters hover over their heads, see the army being deployed at the border and then ask for War.

I understand the frustration of those in the government, the armed forces and all those sitting at home watching TV channels that provoke the sentiments of war but war isn’t in the interest 1.4 billion people. War isn’t the answer, it never was, and it never will be.I’d like to ask those shouting out “everyone wants war” and “we should teach them a lesson”. Who wants war? Those kids whose fathers are guarding our borders want war? The women who got married to someone in the army wants war? The father who lost his son to the bullet, wants war? When you see the loss of life, you don’t want war, when you can hear the firing at night you don’t want war.

War is not a civilized or a dignified way to peace, in factit’s not a way to peace at all. Keeping in mindthe visible facts and disadvantages of war there is a need to devise alternative strategies for peace.Confrontation between New Delhi and Islamabad has not yielded favourable results for either country. The issues should be discussed with the overarching goal of peace and stability in the region.  The area between war and peace is undiscovered and needs to be explored. The value of peace is only understood by those who experience unending suffering caused by wars. It’s time for India and Pakistan to work with each other rather than against each other. Not war but peace is the answer.

I am hoping that more maturity sets in and the two nations realise that one fifth of humanity is at stake. I am more hopeful than I am confident that peace will return and the situation between the 2 countries will improve. Hope is all I have, and that is what I have been living on for the past 25 years.  25 years is a very long time to have lived in a region which has been wrecked by conflict. To be honest, there is more hope than optimism but then “Umeedpeduniyachalrahi, hum bhichalrahehai”

(The author is the chairman of the rebuild JnKFoundation and can be contacted at rebuildjnk@gmail.com)