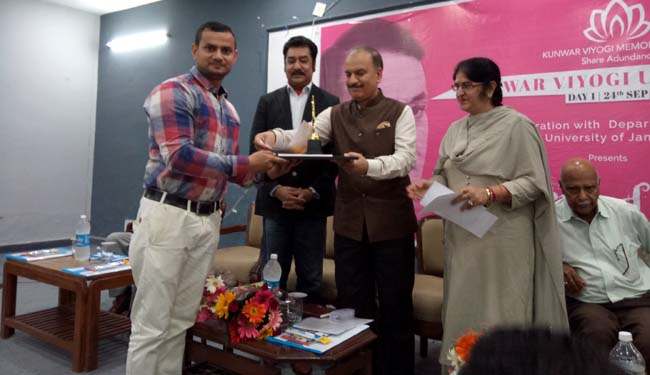 A one-day seminar on “Kunwar Viyogi – Ik Chetein Di Ladi” was organized by the Post Graduate Department of Dogri in collaboration with Kunwar Viyogi Memorial Trust here this morning in the Seminar Hall of the Department of Computer Science, University of Jammu in which galaxy of writers, intellectuals, associates & relatives of Sahitya Akademi Award winning Dogri writer Kunwar Viyogi, students, scholars, teachers & officers of Jammu University and prominent citizens were present.

In the memory of Sahitya Akademi award winning writer Kunwar Viyogi, scholarships have been instituted by the Trust every year for two toppers of M.A. Dogri- one for male and other for female toppers were also given. This year, Mr. Dilbag Verma and Ms. Ravina Sharma, toppers of M.A. Dogri were given the said award. The Trust also introduced scholarship for the topper of M.A. English from this year which was awarded to Ms. Simran Khajuria. The award carries a cash award along with citation and a set of Kunwar Viyogi book of Sonnets ‘Paihlyian Bangan.’

While speaking on the occasion, Trust Chairman Goverdhan Singh Jamwal, highlighted many distinctive qualities of Kunwar Viyogi’s personality as a leading and an inspiring figure.  He brilliantly analyzed the contribution of Kunwar Viyogi which opened new horizons not only in Dogri literature but in the field of Dogra Culture also. He also gave an overview of the functioning of the trust and highlighted the importance of such programmes being organized by the Trust. Sh. Jamwal also shared its future vision of the trust for the promotion of the Dogra language and culture.

Terming language as a DNA of life, which guides the human behavior and is transmitted generation after generation through unwritten words, Prof. Dhar said that language also holds the intricate memory for thousands of years of that particular culture. He said that languages not only help us to communicate but it also binds the cultures together and therefore lauded the role of the Trust for the promotion of the Dogra culture and language and hoped that the Trust will work for its welfare and further promotion in future also.

Prof. Dhar called upon the younger generation to take extensive research in the Dogri Language and its culture as this will prove beneficial for its promotion.

Prof. Dhar also lauded the technological initiative of the trust by way of launching an app –Discover Dogri, which, he said, will be very helpful for the user in understanding and learning Dogri.

Prof. Shiv Dev Singh Manhas presented vote of thanks whereas the proceedings of the programme were conducted by Ms. Kusum Tickoo.