Opening of multipurpose cinema halls in Pulwama, Shopian  a watershed moment for Kashmir 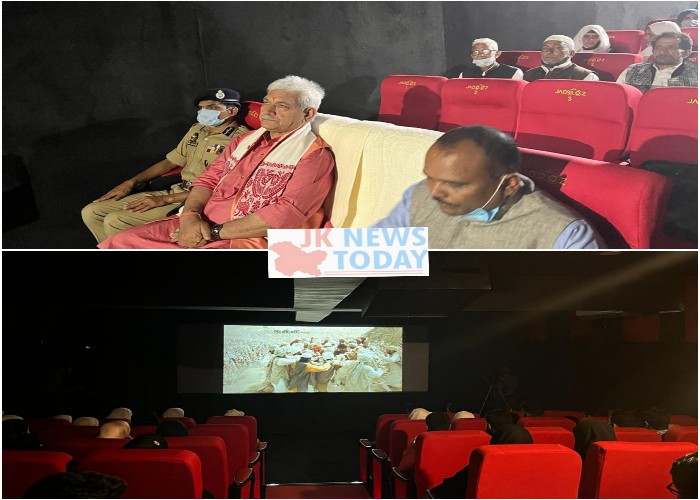 On Sunday, Lieutenant Governor Manoj Sinha inaugurated two  multi-purpose cinema halls, one in each in  twin south Kashmir districts of Pulwama and Shopian, not just scripting  history of the new era in the Valley but also  signifying a major transition from conflict to peace.

We all remember, February 14, 2019, when 40 CRPF troopers were waylaid by a suicide bomber Adil Dar of Jaish-e-Mohammad , a terror outfit based in Pakistan and operating in Kashmir for the past over two decades . That was a  national tragedy  as the troopers drawn from various parts of the country lost their lives in just one big bang ,  planned and executed by Je< chief Masood Azhar  and his cronies , as also the patrons in Pakistani establishment . That attack was avenged when the Indian Air Force bombarded the Jaish terror training camps in Balakot, Khyber Pakhtunkhwa in Pakistan on  February 26. That was a revenge, but the scars of the February 14  terror attacks  continued to serve as  reminder about the loss.

There was something more  that needed to be reflected , that how Adil Dar , and many others of his age , fell into the Pakistani trap and launched a violent campaign against their own people and  the nation .Terrorism had  inflicted the intended losses and the security forces tamed the terrorists , eliminated them,  dented their support system, but still there was something to regain the space and attention of the youth of south Kashmir, for this particular part of the Valley, comprising four districts – Anantnag, Kulgam, Shopian and Pulwama – had become synonymous with terrorism . This area was also infamous for the local recruitment .

Lieutenant Governor Manoj Sinha  with his dynamic approach , opted for two-pronged strategy – to encourage the security forces to go all out against the terrorists and their networks , at the same time   he thought of engaging the youth, their  families in the constructive activities so that  those who  want to structure their future positively , have something to do and contribute to society.

The multipurpose cinema halls  offer them that much-needed  platforms . These multi-purpose  cinema halls , where the movies  would be screened , would  serve as a reminder to them that how peaceful was their Kashmir  when the Bollywood had made it as their second home . name a film actor of 1950s to 1980s , who did not shoot  in Kashmir , and many of these movies like “ Kashmir ki Kali,  Arzoo, Bemissal, Kabhi Kabhi,” were all time hits . The UT administration has brought back the memories of those memorable times in which peace reigned and  also built prospects for a bright future ahead .

Times are changing, L G’s administration is the driving force with Manoj Sinha leading it from the driving seat.