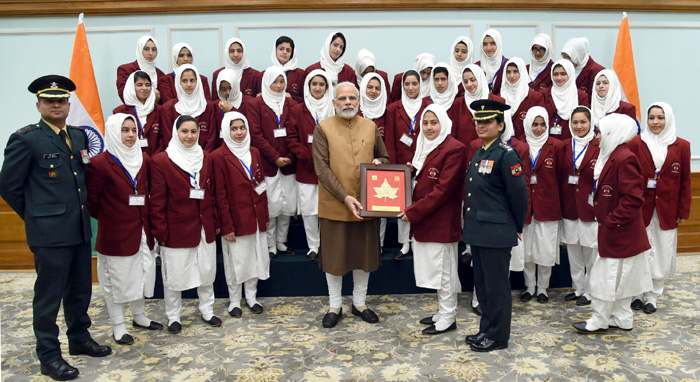 A group of 30 schoolgirls, from Srinagar, Jammu and Kashmir, called on Prime Minister Narendra Modi today in New Delhi.

The students are currently on a tour to various parts of the country, as part of Operation Sadbhavna organised regularly by the Indian Army.

The Prime Minister interacted with the students, on various subjects such as education – especially education of the girl child; Swachh Bharat, and their dreams and aspirations.

In response to various questions posed by the girls during the lively interaction, the Prime Minister explained the various steps being taken for girl child education. He also explained the various spin-off benefits, including on health and tourism that can accrue through the Swachh Bharat Mission. He also touched upon the benefits of Yoga, in improving concentration.

Noting that youth from Jammu and Kashmir are now making it to the civil services in increasing numbers, and are also showing great potential in sports, the Prime Minister asserted that India has a bright future, and the children and youth of Jammu and Kashmir have a lot to contribute to the nation.