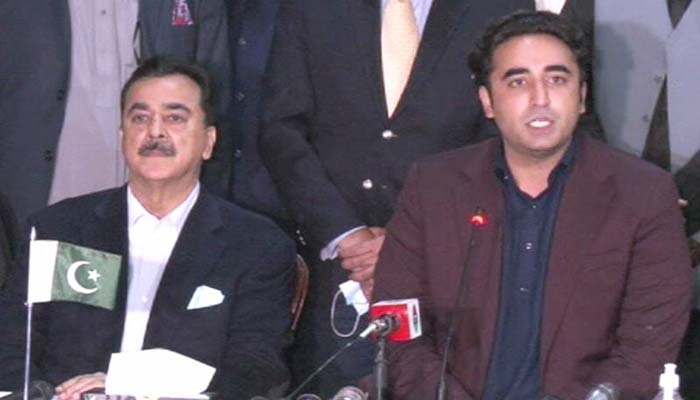 Causing a blow to the ruling alliance headed by the Pakistan Tehreek-i-Insaf (PTI) in the Senate elections from Islamabad, an upbeat opposition on Wednesday asked Prime Minister Imran Khan “to resign in an honourable way” after the defeat of the government’s candidate Dr Abdul Hafeez Shaikh at the hands of Pakistan Democra­tic Movement (PDM) candidate Syed Yousuf Raza Gilani.

“If he (the prime minister) has honour then he should himself resign (from the office). Imran Khan should submit his resignation today as the demand for his resignation is no more only the opposition’s demand but it has now become a demand of the government members as well,” said a cheerful Pakistan Peoples Party (PPP) chairman Bilawal Bhutto-Zardari while speaking at a news conference at the Zardari House with Mr Gilani and other senior party leaders hours after results of the elections on the Senate seats from Islamabad were announced by the returning officer.

Earlier, the PPP chairman had tweeted “Demo­cracy is the best revenge Jiye Bhutto” soon after the announcement of the result.

Later, a number of other opposition leaders, including supreme leader of the Pakistan Muslim League-N (PML-N) Nawaz Sharif, through their social media accounts on Twitter, also felicitated Mr Gilani and termed his election a “glorious victory”.

Later, Mr Sharif talked to Mr Gilani by telephone and congratulated him.

PML-N president and opposition leader in the National Assembly Shehbaz Sharif, who had been brought to the capital to cast his vote through a production order, in a statement said that Mr Gilani’s victory was the expression of a no-confidence by lawmakers in Imran Khan’s government.

“Those who have destroyed the people and the country’s economy and the vote thieves, sugar thieves and flour thieves have been exposed,” said Mr Sharif.

Taking advantage of his presence in the Parliament House, Shehbaz Sharif also presided over a meeting of the party’s parliamentary group and senior leaders in which he bitterly criticised the government’s performance, saying that he had never seen such a “worst government” in the country’s history,

“Well done the PML-N…. congratulations to PML-N members who upheld the narrative of Nawaz Sharif… future is yours,” said Ms Nawaz in her tweet.

In another post, she clai­med that “the fake mandate has been snatched back by the people’s representatives. Their own people, despite the pressure on them, refused to vote for […] (Prime Minister) Imran Khan,” she said, adding that the premier now had no right to occupy the Prime Minister House. Vote chor (thief), leave the chair.”

“The nation is expecting that he (PM) will resign from the office,” he said, adding that a government whose ministers did not even know how to vote in Senate elections had no right to rule the country.

Speaking at the news conference, Mr Bhutto-Zardari said that the defeat of the prime minister from the National Assembly was a “historic win” for the PDM. He said the PDM leadership challenged the government first in the by-elections and then in the Senate and defeated it.

The PPP chairman said that Mr Gilani’s victory was also an expression of a no confidence on the IMF-dictated budget and a reaction of the people over the prevailing price hike and unemployment in the country.

The PDM, he said, would continue its democratic struggle and “the war against this puppet government and will soon send this cruel government packing”.

Speaking on the occasion, Mr Gilani thanked the PDM leaders including Nawaz Sharif, Maulana Fazlur Rehman, Maryam Nawaz, Akhtar Mengal and others and said that he would personally visit these leaders to offer his gratitude.

In reply to a question, Mr Bhutto-Zardari said that the option of moving a no confidence motion against the prime minister was still available and “its timing and place” would be decided by the PDM leadership with consensus.

“There will be long march and there will be no confidence motion. We will decide its timing and place,” he added.

In reply to a question about the decision of the government to challenge Mr Gilani’s election before the Election Commission of Pakistan (ECP), the PPP chairman simply said that Imran Khan was a sportsman and he should demonstrate sportsman spirit.

Mr Bhutto-Zardari evaded a question about the leaked video of Mr Gilani’s son telling the PTI members about the technique to waste their votes, saying that if the government had made an attempt to get its rival candidate disqualified from the race only a day before the elections, this showed that they already knew the results.

PPP secretary general Farhatullah Babar, who was himself a candidate on a technocrat seat from Khyber Pakhtunkhwa but lost the election, in a statement termed the victory of Mr Gilani a “win for democratic process and for political engagement more than the win of any individual”.

Mr Babar said election to the Senate and the by-elections a few days earlier in various parts of the country had not only strengthened democratic process but also vindicated the position taken by the PPP that political parties should make use of every democratic process in fight against fascist tendencies.

“All forums namely elections, the Parliament, the courts and by reaching out to the people directly must be availed in a democratic spirit,” he said.

Mr Babar hoped that the PTI would accept and welcome the victory of Mr Gilani as an expression of free will and call of conscience of the voters and not impute any ulterior motives to those who voted for him.

A senior PML-N leader and former Sindh governor Mohammad Zubair while talking to reporters said that the PDM’s victory was the first step towards ouster of Imran Khan’s government.

“If there is any shame left in Imran Khan, he should resign tonight after dissolving the assembly,” he said, adding that “this is a huge defeat for a sitting government which used all tactics to win the elections with the support of all other forces”. Mr Zubair said they considered Mr Gilani’s victory a “first compensation” which they had received for the rigged general elections in 2018.

The PML-N leader refuted charges that the PDM’s victory was the result of vote buying and said all those having powers, money, perks and ministries were with the PTI.

Talking to reporters, the Maulana said that Imran Khan had no choice, but to resign as the nation wanted fresh elections in the country. He said Mr Khan had not only wasted his vote he had “wasted himself”. He said that he was convening a meeting of the PDM heads next week to discuss the future strategy of the alliance.