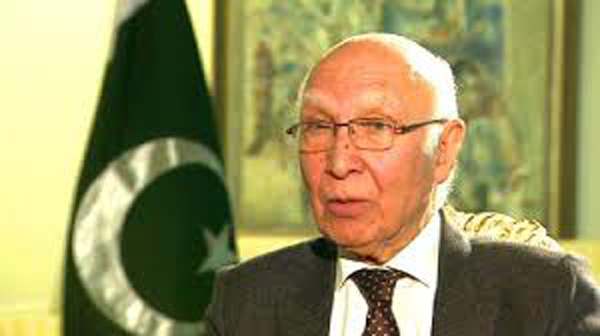 A report from Islamabad  said that Pakistan has decided to set up a new panel to devise new  policy to deal with India and Kashmir against the backdrop of  mounting tensions between two countries, and also  to take advantage of the unrest in the  Valley for the past over four months.

Quoting  Sartaj Aziz, Pakistan’s de-facto Foreign Minister ,  Dawn newspaper reported on  Wednesday  that a  high-level committee, consisting of senior officials from the ministries of defence, inte­rior and information, the Mili­tary Operations Directorate, Inter-Services Intelligence (ISI) and Intelligence Bureau (IB), has been formed to formulate “a doable and sustainable India-Kashmir policy”.

Sartaj Aziz  made this disclosure  in Pakistani  Senate on Tuesday, the newspaper said.

Speaking about the status of the implementation of policy guidelines, given by a Senate committee of the whole house, the prime minister’s adviser on foreign affairs said the committee was headed by Foreign Secretary Aizaz Chaudhry and could co-opt other members if required.

Although the Senate had originally recommended the formation of a task force — including chairpersons of the defence and foreign affairs committees from both houses of parliament —  Aziz said the committee would regularly brief the two committees.

He said that a committee, chaired by the information secretary, had been “formed to prepare fact sheets, counter India’s propaganda campaign and design a media strategy to continuously highlight the Kashmiri freedom struggle.”

This committee also includes representatives from the ministries of defence, foreign affairs and information technology, as well as members of the Military Operations Direc­torate, ISI and IB.

Aziz said that the Ministry of Information Technology had been asked to  “prepare a comprehensive strategy to highlight the Jammu and Kashmir dispute via social media.”

He added that steps were being taken “to highlight Indian interference in Pakis­tan’s internal affairs, as well as its support for subversive activities and human rights violations in held Kashmir.”

Aziz referred to the dossier on India’s interference in Pakistan, presented to the UN secretary general by the prime minister in September, saying: “This dossier has been shared with other key countries and international organisations. Another dossier on the activities of Kulbhushan Jadhav will also be finalised in the near future.”

He admitted that the role of international lobbyists had become crucial in order to project the country’s position and pursue foreign policy objectives and said that Pakistani missions abroad were also in close contact with the Pakistani and Kashmiri diaspora.

He claimed that steps were already being taken to reach out to segments of the Indian public that were opposed to Narendra Modi’s extremism, saying: “Our missions abroad, including in New Delhi, are making outreach efforts to emphasise the extremist Indian policies,” he remarked.

Talking about measures to counter India’s efforts to isolate Pakistan in the region,  Aziz said Pakistan was doing its utmost to engage the international community, including regio­nal partners.

He said Pakistan was supportive of all initiatives for peace and stability in the region, adding that this commitment to regional peace and stability was evident from the decision to participate in the Heart of Asia ministerial conference in Amri­tsar, despite the postponement of Saarc summit in Islamabad because of India.

Pakistan’s nuclear doctrine, he said, was clearly spelt out and due restraint was being exercised. “Pakistan continues to exhibit maturity and statesmanship despite provocative statements by Indian leadership and the continued ceasefire violations across the LoC and working boundary having resulted in civilian casualties.” He was at pains to point out that Pakistan’s armed forces only returned fire when fired upon.

He said it was for parliament to decide whether a separate committee on national security should be constituted.

The adviser on foreign affairs stressed the need for a positive response from India in order to move forward. He said that while Pakistan always conveyed a desire to resolve all outstanding issues through dialogue, India had chosen to attach conditions to the talks.

While reiterating Pakistan’s respect for the ceasefire arrangements of 2003, he said there had been over 300 ceasefire violations by India this year.