Pakistani national held at IB, was a Lashkar sympathisizer 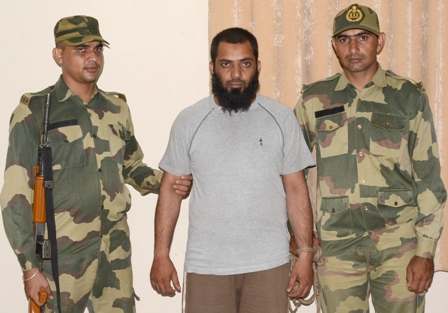 BSF today apprehended a Pakistani national from International Border, when he was about to enter Indian Territory from Pargwal sector in Jammu region. Later, it was revealed that tLashkar-e-Toiba

The BSF DIG (G), Dharmendra Parikh informed that an the wee hours on Friday, alert bordermen in Pragwal Sector of Akhnoor area apprehended a young Pakistani National who crossed over the International Border stealthy and was trying to negotiate Border Security Fence to infiltrate into India. “During preliminary questioning he revealed his identity as Abdul Qayum, 32 Yrs son of Bhag Ali of Village- Pul Bajuan, Distt- Sialkot, Pakistan,” said the DIG and added that he was in possession of one dual SIM Nokia Mobile.

On further questioning he revealed that in 2004, he underwent “Daura e- Aam” militant training with LeT out fit at Mansera Training Camp, Muzaffarabad, POK. Thereafter he has actively worked for LeT and remained associated with distribution of Jihadi Literature and magazine like Gajwa and Jarar etc as well as collection of Fund for LeT.

“He has collected 50 Lacs of Pakistan Currency and handed over to LeT Amir namely Mujahid Bhatt of Sialkote area. He has found to be well aware of all various terrorist organization based in Pakistan and their leaders including Hafiz Sayeed, Sayed Sallauddin and also separatist leaders of Kashmir i.e. Syed A S Gilani, Asiya Andrabi, Yasin Malik etc,” informed DIG Parikh and added, “He further revealed that ultimately he realized that Jamat –Ul- Dava and Falah-e- Insaniyat so called charitable organisation of LeT are actually accumulating money for Jihadi activities.”

However, he further confessed that he came to realization at later stage that no brother and son of any terrorist leader like Hafiz Sayeed, Sayed Sallauddin etc have participated in Jihad and are enjoying their life in foreign country whereas poor children of Pakistan are being brain washed to cause militant activities on the pretext of false atrocities on Kashmiri Muslims by India and thereby decided to come to India as fed-up with Pakistan. Individual has been handed over to police for further investigation.