Tributes to Uri bravehearts at London 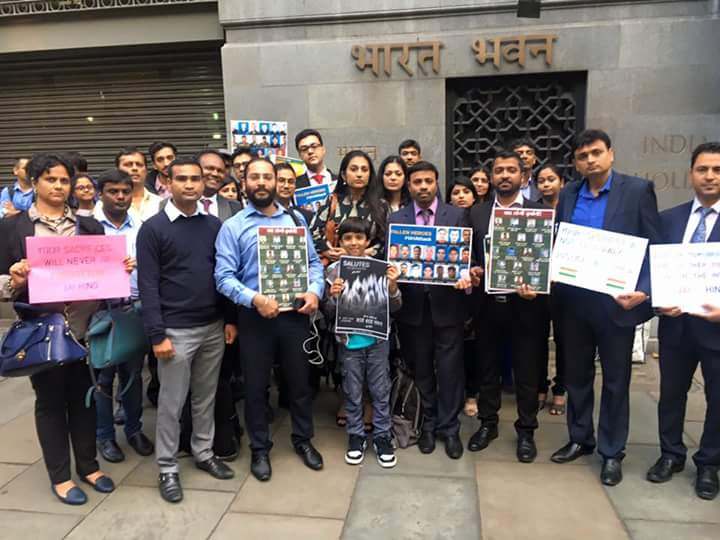 Joining hands with their counterparts in India, the Indians at London also paid tributes to the soldiers martyr during Uri terror attack on Sunday. Hundreds of Indians especially, the people from Jammu and Kashmir, who are now settled in United Kingdom assembled outside Indian High Commission and paid tributes to bravehearts of Uri.

Voice of Dogras, an organization having roots in Jammu and members at both London and Jammu and Kashmir, organized a ‘Shraddhanjali to Shaheedon’ for Uri Martyrs at the Indian High Commission, London. The prayer meeting was followed by two minutes silence in honour of the bravehearts of Uri. The solemn atmosphere was only broken by cries of Bharat Mata ki Jai and Vande Matram as Dogras, Kashmris and Indians from different parts of the India, living in London, remembered the men of 10 Dogras and 6 Bihar regiment and acknowledged their supreme sacrifice.

Madhav Turumella, a learned Hindu Priest, offered a Vedic prayer, that says Tyaag has the highest place and it opens the doors to heaven as it has done for these martyrs. Lalit Sharma, a Dogra and Executive Member,Voice of Dogras, expressed his anguish over the precious loss of lives of our men and demanded that there should be an end to this mindless violence and dastardly acts of terror. This sentiment was mirrored by Kanika Gupta, another Jammuite who said the candlelight vigil made her feel slightly better but she hoped that she would not have to attend another one anytime soon. Rahul Angre from Mumbai, who proudly calls himself an honorary Dogra, said, that it was high time that the Indian government ensured security and stability to a region which has seen violence for the last 70 years.

There were many Kashmiri Pandits present, lead by Lakshmi Kaul, Founder Kashmiri Pandit Cultural Society, who said, ” We are all with the  armed forces and their families, especially in times like today and we must not let their sacrifice go waste”.

For Manu Khajuria, Founder, Voice of Dogras, this hit closer home, as one of the martyrs of 10 Dogras, Subedar Karnail Singh belonged to Shibuchak, her neighbouring village in Bishnah Tehsil. She expressed her desire to visit the family in person and convey the sentiments and deep sense of gratitude of Indians living abroad.

There was a deep frustration amongst those gathered, about the frequency of attacks on our security personnel. Pathankot, Pampore and now Uri, the cowardly terror attacks go on unabated. Everybody hoped  that the Indian Government would take firm and clear steps to prevent these kinds of terror acts from happening in the future.  A memorandum for peace and security in Jammu and Kashmir was submitted by the Voice of Dogras to the Indian High Commission.