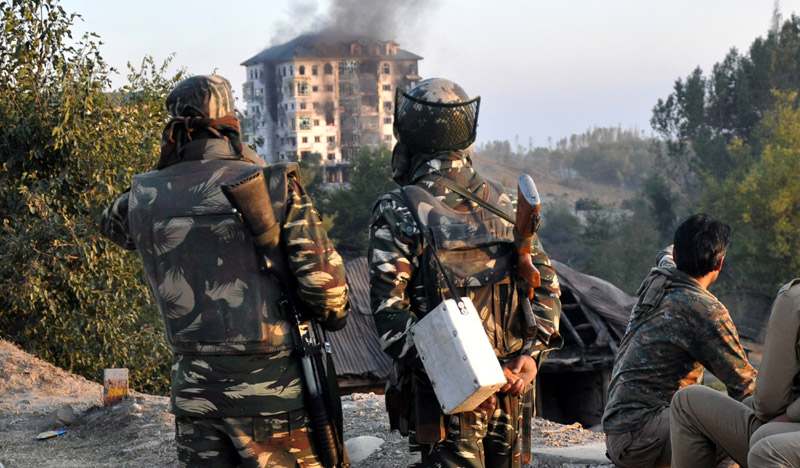 Srinagar, October 12  ( JKNT)  The Indian army has described the  Pampore encounter which concluded Wednesday afternoon as a “ tricky operation”  for it involved the  possibility of a  collateral damage and the huge structure of seven-storey  concrete building .

“ That’s why it took time to complete the operation,” an army officer told reporters after it was declared as “ over”  after nearly two-and –a half- day long gun fight  with two terrorists holed up in the building.

The army officer said that the  army used percussion  effect so that the glass planes break  and  openings are made.

“ Two terrorists have been killed  and two assault rifles have been recovered,” the army said .

This encounter at the EDI building had started  early Monday morning when a road opening party of the army had spotted the  terrorists sneaking in to the building. The forces were requisitioned and operation launched with rocket propelled grenades and machine gun fire.

After killing the two terrorists, the army scanned the building of 60  rooms and equal number of bathrooms and attic and after satisfying that there were no more terrorists alive, the operation was declared over.

This time the army was more cautious than  last time in February when the same building was occupied by the four Pakistani terrorists . The army had lost three of its men, including two officer rank Para Commandos .