PDP reverts to its agenda, may sacrifice government 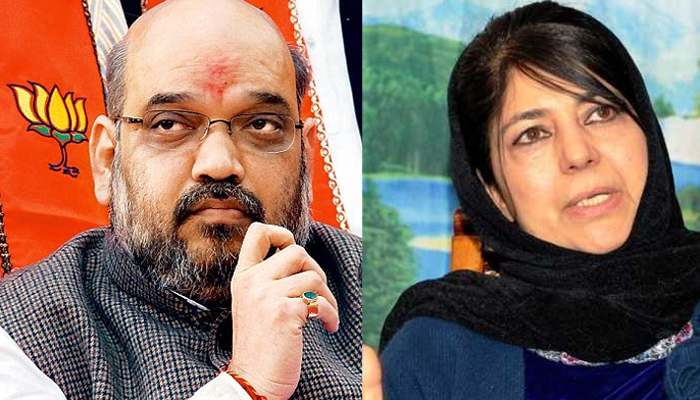 It is now clear that Peoples Democratic Party of Chief  Minister Mehbooba Mufti  is effectively   moving away from Bhartiya Janta Party  with which it is ruling as an alliance partner in Jammu and Kashmir .

The recent meetings of PDP in  the Kashmir Valley and Jammu region  have  adopted a  strict discourse of dialogue with Pakistan and all the stake holders  in Kashmir, which in translation means  the Hurriyat Conference .  And, BJP is opposed to this line  at the moment after terror attack  at the army base in Uri on September 18th and  regular border firing from Pakistan on borders .

Internally, too,  PDP is feeling heat in the Valley for its alliance with the  BJP. It has suffered  a  major blow to its image as a Kashmir-Muslim centric party  after it allied with BJP  to  form government with a justification that it was the only way available to “ meet aspirations of Kashmir and Jammu region “ and also to strengthen bonds within the state.  But its leaders, have also realized that  this is a stale line of argument , which has no takers in either of the regions of the state.

PDP president  and Chief Minister Mehbooba Mufti  while maintaining the “ strengthening  of the regional bonds and   coalescing  the divergent aspirations of the  peoples of the two regions ,”   never forgets to place friendly-Indo-Pak relations and  dialogue with stake holders to resolve Kashmir issue on the highest pedestal . That brings out a clear distinction   between her and her party’s agenda  and that of the priorities of the BJP.

Mehbooba Mufti and  PDP have seen through the weakness of the  BJP, and they are riding over all the  occasional voices of dissent of the ally’s leadership.  The  BJP ministers have become  habitual  “ yes boss” type subordinates  to the PDP ministers in the matters of policy  decisions and the administration .

To regain its ground in the Valley, where PDP had been making its presence of political landscape , the party has started sending clear signals that it won’t mind pursuing its agenda  at the cost of the alliance government . It knows the political compulsion and greed of BJP to stay in power at any cost . So it is  steamrolling the alliance partner  to  reverse the loss of its fortunes during the four-month –long unrest in Kashmir.