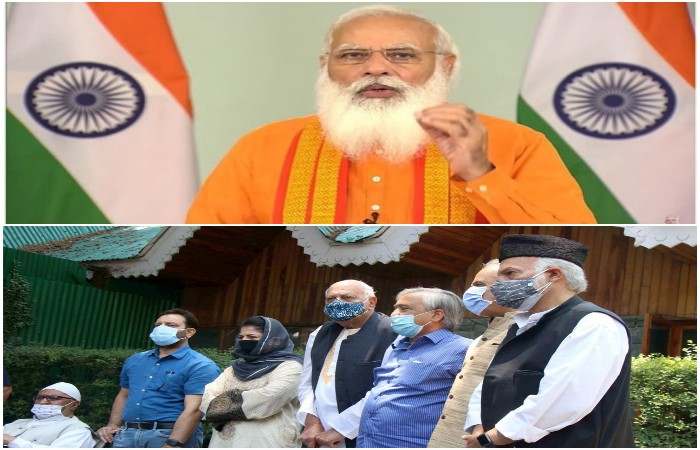 A day before the  leaders  from Jammu and Kashmir embark  on the most important  journey  to Delhi to attend  an all-party meet with  Prime Minister Narendra Modi  ,, hopes are pinned on how the meet would  play out  something  positive  for the people – Assembly elections and something more  that will fit into the new aspirations for peace with development-oriented dignity.

The development has been redefined in the current times. It is not all about the infrastructure, road  and buildings , but it has deeper meaning of politics of positivity  in which the human dignity is supreme . The human dignity is a translation  for  good education , peaceful atmosphere and environment to build careers . In short, it is a replacement  of symbolism with  realism , where  not slogans but  concrete career- building opportunities, drawing of curtains  on uncertainties once and for all.

That makes this meet historic  as it will  unveil  the direction which J&K can hope for itself and how far the Centre and the leadership from the Valley  and Jammu region  can join hands on the common and promising outlook  for the Union Territory, where a large section is also hoping for the return of the statehood.

There is an assumption that the  Centre is trying to  rewrite its script of  August 5, 2019, when it  had abrogated Article 370 and divided the erstwhile state into the two union territories of Ladakh, and J&K. It may be the case. And if  that is what the meet is all about , two important things need to be understood- one , this is the initiative of Prime Minister who has  involved his own personality , and the institution  in this meet . This, in itself is a unique thing , for he has demonstrated that he has good of the people of J&K at heart   and that’s why he is willing to sit with all those who had  launched barbs at him . This shows his spirit of accommodation.

Second , this meeting is not about chat show, but filled with a desire to find a  secure future for Jammu and Kashmir that had eluded it for decades.

It doesn’t matter  when  this meet is being held  as long as the spirit and intentions  are clear . Prime Minister has manifested these  in no uncertain terms .

Prime Minister has chosen  timings and guest list  striking a balance between the  pro-and anti-Article 370  narrators.. There would be a mix of  arguments, and that is what the all-party meets are meant for  to bring out where  agreement  evolves  from the disagreements .  Seen against  this backdrop , there is a hope that  meeting holds a lot of promise.

This fact is further substantiated by the  decision of the People’s Alliance For Gupkar Declaration  ( PAGD) to take part in the deliberations  and air  its viewpoint  insisting on  the restoration of Article 370 . They know that they can do it  because there would be ears to listen to the same. Listening to the arguments contrary to the personal and political ideology is the essence of democracy . In that sense, it  would not be wrong to assume that the positive outcome or the positive course of direction should come in sight at the end of the meet on June 24.